Éduc’alcool’s new ad campaign: 'What exactly are we laughing at?' 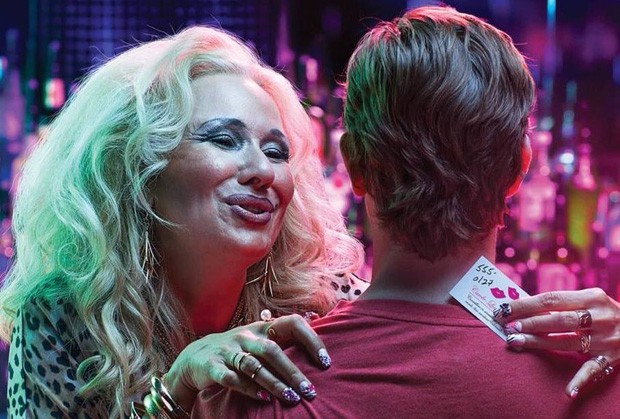 A woman leans into a young man, her arm slung around his neck. We can’t see his face, but we can see hers; middle-aged and heavily made up. She clutches a business card with a telephone number on it.

The caption below reads: “Look who you just gave your number to.”

This poster is one in a series of ads that makes up Éduc'alcool’s newest responsible drinking campaign, aimed at curbing alcohol abuse among CEGEP and university students.

Its slogan? Moderation is always in good taste. 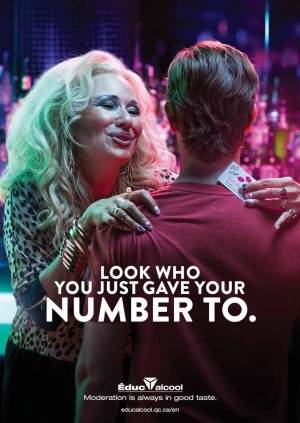 “I think it’s clear that what we’re supposed to understand from this image is the traumatic consequence of drinking too much — which is, you might hook up with someone who isn’t young, or who doesn’t meet the conventional norms of beauty,” says Peter C. van Wyck, a professor in Concordia’s Department of Communications.

“The implication that a middle-aged woman could ‘happen to you’ as the result of an incapacity is socially and politically unacceptable. It suggests older women aren’t legitimate objects of desire.”

According to Hubert Sacy, director general of Éduc'alcool, this ad was tested on four focus groups of two men and two women. In an email reply to van Wyck’s complaint, Sacy reported that the focus groups gave the advertisement a grade of 9/10 and he claims nobody detected any ageism or sexism in the campaign.

‘Is this something we want to accept?’

“That they tested this with young people and nobody found a problem is in itself problematic,” says van Wyck, who plans to use the Éduc’alcool poster as a launch pad for in-class discussions on ethics and imagery in his introductory Communication Theory course this term (COMS 240). “It highlights the real importance of what we teach in communication and media studies.”

Van Wyck believes that in order to think critically about visual consumption, students need to ask themselves what they’re accepting when they look at an image without questioning it. 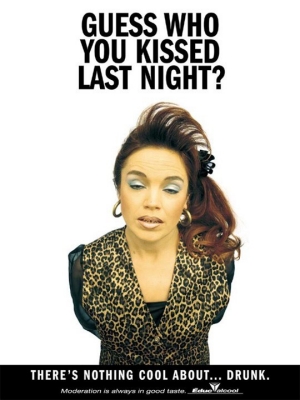 In this case, Sacy at Éduc'alcool suggested the ad was meant to be funny.

“All [focus group participants] considered it [to be] a humouristic and very efficient way to denounce excessive drinking without being moralistic,” wrote Sacy, adding several rhetorical questions later in his reply, including: “Could it be that some people can't see that the situations are so exaggerated that it's obviously not serious and it's only humour?” and “Could it be the ageism and sexism would be in the eye of the person who looks at the campaign and not in the campaign itself?”

Van Wyck looks beyond the joke and points to larger issues at play. His critique of Éduc'alcool was picked up by Le Devoir this week. In August, the newspaper also published an article about an outcry from trans community organizers over one of the non-profit's ads, which led to an apology from Éduc’alcool.

“If it's funny, then what exactly are we laughing at?” van Wyck asks. “To see it as humorous is to accept the premise that the negative gift of drinking too much is flirting or hooking-up with an older woman. Or perhaps a trans woman — it’s difficult to tell. You need to ask yourself whether that’s something you want to accept. And we need to ask ourselves whether these images ought to be disseminated in Cegeps, universities and each of the 406 SAQ outlets in the province of Quebec.”

‘There’s no such thing as just an image’

Van Wyck adds that of all the serious problems that might arise from student binge drinking — such as injuries, sexually transmitted disease, drinking and driving arrests and accidents, and the persistent problem of sexual assault — Éduc’alcool missed the mark with what could have been a socially valuable campaign. 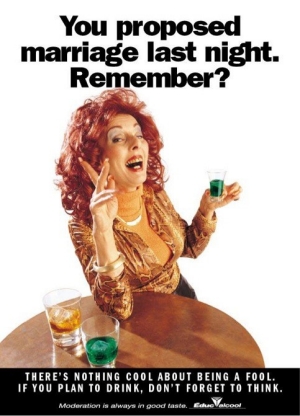 A public service campaign should aim higher, he points out, than a commercial campaign from the private sector. Witness Axe’s male grooming advertisements, which are part of a targeted, product-driven campaign for a private company.

“Yet in Éduc'alcool’s case, it is difficult to tell exactly what the status of this organization really is. It is a charity organization, with an operating budget of over $3 million annually. Yet its eight-person Board of Directors includes representation by the (SAQ) Société des alcools du Québec (SAQ), leaving one to wonder if keeping things ‘humorous’ simply serves the interests of an alcohol industry wishing to appear socially responsible.”

“Can we really believe that the SAQ — a provincial crown corporation — has an interest in people drinking less?”

According to van Wyck, the Éduc’alcool poster aims “appallingly low” for a public service campaign, supporting the notion that women have expiry dates. Once expired, the notion goes, these women don makeup and prey upon our inebriated youth.

“This raises serious questions about advertisements, the relationship between captions and images, the power relations concealed within them and the handling of difficult topics like drinking and sexual relationships,” says van Wyck.

“Part of the problem is there’s no such thing as just an image, and the extent to which people believe there is makes them easy pray for ads and other forms of social communication that ask us to accept politically reprehensible representations. ”