Tillutarniit: a window into Inuit culture

From August 4 to 6, Concordia’s FOFA Gallery teams up with the Montreal First Peoples' Festival for an outdoor film series
|
By S. Baker 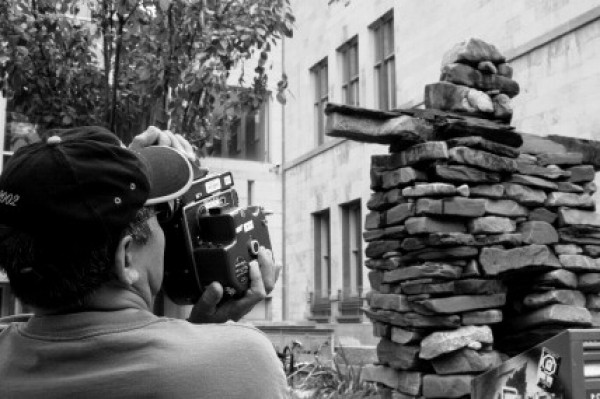 This August, the FOFA Gallery will host Tillutarniit (Pulses), three days of free outdoor film screenings beginning at 8:45 p.m. on August 4. The series features nine works directed by or in serious collaboration with Inuit.

Inuk artist Stephen Puskas, and Isabella-Rose Weetaluktuk, an Inuk filmmaker, joined together as co-curators to create this opportunity after taking part in a roundtable discussion held at Concordia in March 2016.

“This project has been the realization of a dream that I didn’t know I had,” says Weetaluktuk.  “It’s exciting to see Inuit syllabics displayed so prominently on a Montreal street, and to invite everyone to share the space with us and celebrate our culture."

Puskas also sees the series as a way to expose non-Inuit to the Inuit community: “There is a real lack of education about indigenous people in this city, which is why events like this are important.”

However, exposure and education are not the only things the organizers hope to achieve.

“I felt that this was a really important opportunity to set a good example about how people can respectfully represent another culture,” says Puskas. “I want this event to be more of an exchange, to be more inclusive of Inuit and have Inuit in the crowd.”

From Yellowknife to Montreal

Originally from the Northwest Territories, Puskas says Yellowknife has a strongly integrated indigenous population, something he feels is missing in Montreal.

“An event of this type, that really shows Inuit culture, and included Inuit in the planning, will be a good way for Inuit to feel like we really do belong here,” says Puskas.

The festivities will kick off with a special musical performance by Inuk singer Beatrice Deer accompanied by guitarist Christopher McCarron. Additionally, Inuit food, games and prizes will set the stage for the sunset screenings which are categorized under three distinct themes: Unikausiit (history), Nuna (land) and Pimmariktuq (resilience).

Making a case for responsible filmmaking

“We wanted to be inclusive of the Inuit community, and we really tried to prioritize films made by Inuit,” says Puskas.

However, not all films in the program are by Inuit filmmakers. This was a purposeful decision, since the organizers also wanted to use this opportunity to show how filmmakers can go about responsibly and respectfully making a film about another community.

“As storytellers, filmmakers are showing the rest of the world a community when they put a spotlight on them in their films, and they should be serving the interests and well-being of that community when depicting them, not exploiting the community,” Puskas says.

Overall, the co-curators hope the series will provide Inuit with a truer depiction of themselves, while presenting the non-Inuit community with sides of Inuit culture they've perhaps never seen before.

The Tillutarniit (Pulses) film screening series starts at 8:45 p.m. on Thursday, August 4, and runs every evening until Saturday, August 6, in the FOFA Gallery courtyard (1515 Ste. Catherine St. W.) on the Sir George Williams Campus. In the event of rain, the screenings will be held indoors (York Amphitheatre, EV 1-615). This event is free.