On July 16, Concordia students spearhead a tribute to the 1980s pop icon
|
By J. Latimer 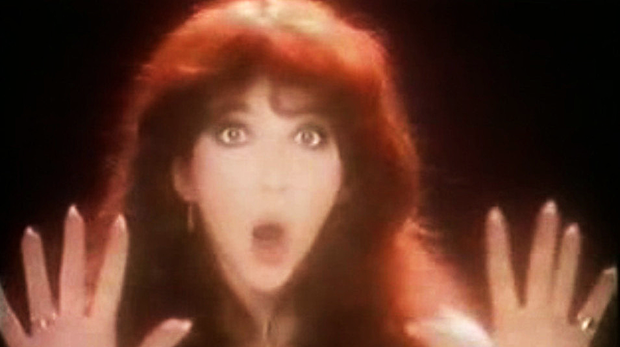 Mark your calendars … and get out your red dress.

On Saturday, July 16, hundreds of Kate Bush fans around the world will simultaneously perform a dance routine to honour the ethereal 1980s pop icon Kate Bush.

“The flash mob will recreate the dance moves in her famous ‘Wuthering Heights’ video — the red dress version,” says organizer Sandra Huber, an interdisciplinary PhD student in humanities at Concordia, where her research focuses on the intersection of technology, feminism, mysticism and contemporary witchcraft.

“Montreal is the only Canadian city to participate. The idea started in Berlin, but soon spread everywhere, from Tel Aviv to Stockholm. The German flash mob begins at 3 p.m. their time, but nobody in Montreal is going to get up at 9 a.m. on a Saturday, so we decided to hold it at 3 p.m. our time.”

So far, the Facebook page for the Montreal event shows 506 people going, with another 808 people interested. The organizers don’t take the Facebook statistics too seriously, but still, they secured a permit for a sizable section of the east side of Parc Jeanne-Mance.

“What originally drew me to Kate Bush's video for ‘Wuthering Heights’ was the charming awkwardness of it,” says co-organizer Hilary Bergen, also an interdisciplinary PhD student in humanities at Concordia.

Bergen is featured in an instructional video to teach participants the video’s choreography.

Like everything else about mounting the Kate Bush flash mob, making the video was a collaborative effort between the four main organizers, who also include Concordia graduate students Eileen Holowka and Karissa LaRocque, with help from videographer and Concordia PhD student Emilie St-Hilaire.

“There is something both campy and over-the-top but also completely earnest and unironic about it that explains its resurgence in popularity,” says Bergen, who was a professional dancer in Winnipeg prior to pursuing her PhD. “I imagine that for the young people obsessed with it today, it's less about nostalgia and more about a celebration of weirdness in all its magical forms.”

Bergen notes that the music video and song embody the collaborative spirit of the work the team does at Concordia’s Milieux Institute for Arts, Culture and Technology, and at the Media History Research Centre (MHRC), under their supervision of MHRC co-founder Darren Wershler, associate professor in the Department of English. Most of the organizers also write online for Wershler’s The Pod (Prose on Demand).

The Facebook page recommends you bring your “unadulterated glee and your biggest eyes.”

Check out the Facebook page for the Montreal Kate Bush flash mob. And don't forget your red dress!

Find out more about Concordia’s Milieux Institute for Arts, Culture and Technology.