How can we slow down urban sprawl? 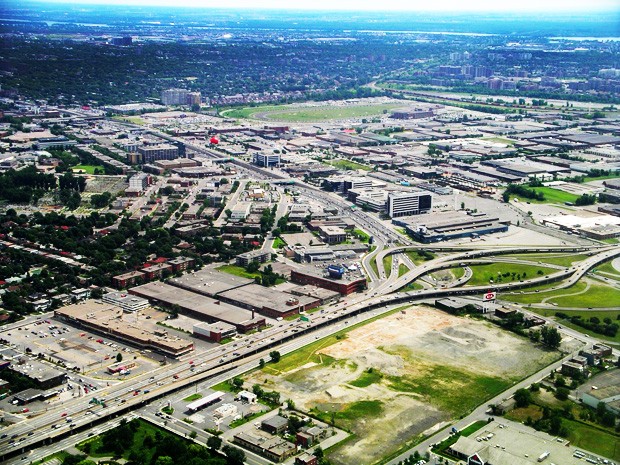 An example of urban sprawl around the autoroute 15 and 40 interchange. | Photos by Craig Townsend

With more than half of the world’s population now living in cities, urban sprawl is a growing problem — particularly in North America, where single-family homes and two-car garages are common.

But it’s also an increasing concern in various European countries, where living large is becoming more and more attractive.

Just how fast are cities increasing in size? And are there ways for us to slow their expansion?

New research from Concordia shows that there’s indeed a lot more we could be doing to combat urban sprawl — and European countries are leading the way.

“Before we can put a stop to urban sprawl, it’s important to understand how to reliably measure it,” says Concordia geography professor Jochen Jaeger, co-author* of a recent joint European Environment Agency / Federal Office for the Environment report.

“To do that, we developed a metric called Weighted Urban Proliferation — or WUP. It takes into account how much of an area is built up, the spatial dispersion of the built-up areas, and how many people live or work in a given place.”

Once Jaeger and his co-authors had developed the WUP method, the research team combed through detailed data sets on 32 European countries to map out general trends and pinpoint problem areas.

They found that large parts of Europe are affected by urban sprawl, with the lowest levels in Iceland and the highest in the Netherlands and Belgium.

At a more granular level, sprawl is most pronounced in wide rings around city centres, along large transport corridors and along coastlines. The lowest levels of sprawl are mainly associated with mountain ranges or remote areas — hence Iceland’s ranking.

“This is the first report to provide a comparable measurement of urban sprawl for all EU and European Free Trade Association countries. It clearly shows that the rate of sprawl is increasing, and confirms there is an urgent need for action,” says Jaeger.

On this side of the pond

In North America, the situation is worse. In Montreal and Quebec City, urban sprawl is increasing at an exponential rate, according to a study co-authored by recent Concordia graduate, Naghmeh Nazarnia.

Using the WUP method, she compared the two cities and found that urban sprawl has accelerated continuously since 1951, with the fastest increases taking place in the last 25 years. In Montreal, the degree of urban sprawl went up 26-fold from 1971 to 2011, while in Quebec City, it rose ninefold.

“Compare these levels to a European city like Zurich, and you’ll see the opposite trend. Here in Quebec, the fastest increases in sprawl have been observed in the last 25 years, whereas there the strongest acceleration was in the 1960s. This comparative analysis can help land-use planners control urban sprawl. The WUP method can also be used to establish targets and limits, and to see how effective those control measures are,” says Nazarnia. 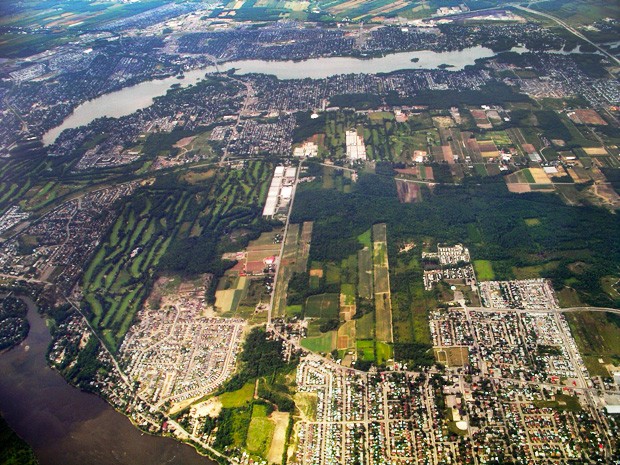 Less sprawl, but not more high-rises

The researchers caution that if we want to stop the exponential increase, we have to take action now. But the solution is not to build more high-rises. Simply put, the best solution is to use and re-use land sparingly.

For Jaeger and Nazarnia, a combination of measures work best:

Nazarnia notes that these measures are already being undertaken in Europe. “Zurich, for example, has stronger planning legislation, much higher levels of public transportation and much lower levels of road traffic than Montreal and Quebec,” she says.

In fact, some innovations are already taking place on both sides of the Atlantic to stop urban sprawl, Jaeger points out.

“One great example is the Alternative Bank of Switzerland, which will not give mortgages to development projects that contribute strongly to an increase in urban sprawl. Another is the Canadian government’s recent move to halt a construction project in a Montreal suburb in order to protect chorus frogs,” he says.

“These are steps in the right direction, and hopefully a sign of things to come. We have set official limits on air pollution and water pollution. Why not set similar limits on urban sprawl?”

*Partners in research: The study about urban sprawl in Europe was funded in part by the Swiss Confederation, with additional support from the European Environment Agency. Additional co-authors on the European Environment Agency / Federal Office for the Environment report are Ernest I. Hennig (recent Concordia postdoctoral fellow); Tomas Soukup and Erika Orlitova (GISAT); Christian Schwick (Die Geographen schwick+spichtig); and Felix Kienast (Swiss Federal Institute for Forest, Snow and Landscape Research).

Learn more about sustainability at Concordia.