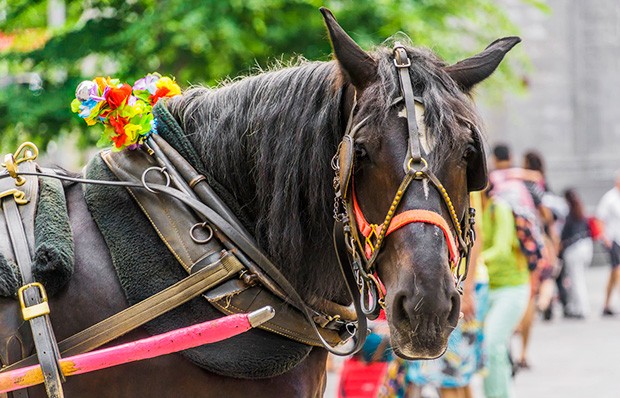 Rosemary Collard is an assistant professor in the Department of Geography, Planning and Environment at Concordia.

Would you take an arsenic pill to cure a skin problem? Squeeze into a corset so tight it could kill you over time? These popular trends of the Victorian age have thankfully fallen out of favor. Now it’s time to let go of one more vestige of that bygone era: horse-drawn carriages.

The City of Montreal took a step in that direction this week when Mayor Denis Coderre announced a year-long moratorium on calèches — the horse-drawn carriages that carry people — mostly tourists — around Old Montreal. The city’s 24 carriage operators will be reimbursed for the cost of their operation permits, which have been suspended.

The 56 calèche horses who live and work in Montreal have been the subject of fierce debate between tourism officials, members of the public, animal advocates and the horses' owners. This debate bubbles up almost annually, every time a horse collapses in the street, or collides with a car, as was the case last month in Griffintown.

Advocates of the calèche industry say that the horses are part of the city’s identity, a source of employment and a draw for tourists. They point to city veterinarians who have reportedly found that the horses’ health has improved since the city has taken measures to regulate the industry over the last few years. These measures include bylaws to “protect” the horses, like requirements that they not work in above-30 degree weather, and that they rest at least six hours a day.

But even if these bylaws are enforced, horses can still be worked 18 hours a day in 29-degree heat. Under the law, the calèche horses are property, equivalent to the cars with which they share the busy streets.

Of course, unlike cars, horses are living, social creatures. The calèche horses are better thought of as workers, but workers who receive no compensation beyond the basic provisions for their survival. They are workers who are exposed to dangerous working conditions, navigating the traffic, construction zones and exhaust of modern city streets. They are workers who, now unemployed for the year, will hopefully be sent to a refuge rather than a slaughterhouse, as calèche operators are threatening.

The province of Quebec recently passed a bill that defines animals as sentient beings. This bill responds to a cultural shift underway, in which the designations of animals as property are archaic, like the calèche industry. Following this bill and the lead of other major cities like Paris and Beijing, Montreal should extend the calèche moratorium into a permanent ban, relinquishing a punishing practice that long ago went out of date.

Find out more about Concordia's Department of Geography, Planning and Environment.