“I don't want people to think, I want them to feel it,” says Alisi Telengut, an MFA student in the Mel Hoppenheim School of Cinema. | Images courtesy of Alisi Telengut

A family walks hand in hand through a flowery meadow, and then disappears. The lone face of a boy is shrouded in darkness when a cattle-car door slams shut. A horse’s face turns to bone and disintegrates, before morphing into the haunted visage of an elder.

MFA student Alisi Telengut’s short film Nutag – Homeland is a hand-painted visual poem, a “surrealist requiem” for the Kalmyk people who were deported to Siberia during and after the Second World War by Stalin’s Soviet regime.

Telefilm Canada recently selected Telengut’s six-minute work for the sixth edition of Canada: Not Short on Talent, on May 11 to 22, 2016. The curated showcase is presented every year at the Short Film Corner, a component of the Marché du Film at the Festival de Cannes.

Nutag – Homeland will also be screened at Concordia during a free, public MFA thesis film event on Friday, April 8, at 6 p.m. in the J.A. DeSève Cinema.

Inspired by the South African artist William Kentridge, Telengut created her film frame by frame, applying and removing oil pastels to change the image on the same piece of paper.

“With under-the-camera animation, you never change the paper, you just erase the previous frame and continue on,” she explains. “If you make a mistake you can't go back. The momentum is always forward.”

The six-minute film took Telengut a year to complete. “Not every day, but part-time for a year,” she says. “At the end it was really intense, because I had a deadline for mixing the sound. I worked on it for three days without sleeping!” 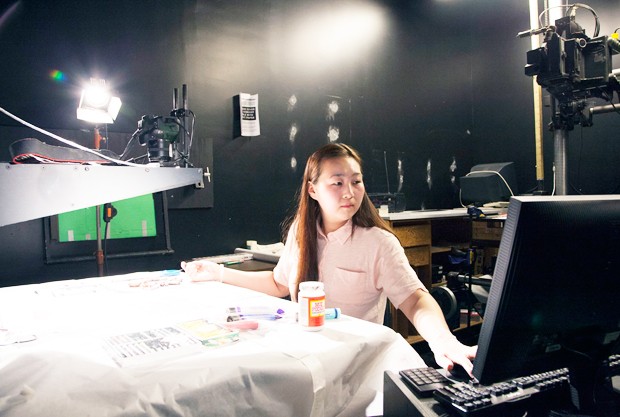 ‘I really identify with this group'

The film purposefully avoids a narrative structure, instead relying on a collection of dream-like scenes, haunting music and sounds to convey the sadness caused by a barbaric act of forced displacement.

“I don't want people to think, I want them to feel it,” says Telengut. “That's why I removed all the dialogue, and just left the song and the bit of text at the end.”

Originally from Mongolia, Telengut came to Montreal to study and has since settled here. She earned her BFA in film animation from Concordia in 2013.  After meeting a group of Kalmyk people living in Montreal, she decided to pursue a film project based on their story.

“One of them passed away after my interview, and it really affected me a lot,” she says. “I'm not Kalmyk, but I really identify with this group, because they are the ‘other’ and I consider myself as the ‘other.’”

Telengut also identifies with being part of a diaspora, another theme that was important to her in making the film. “Canada is my new home, so I can relate to their experience, even though I wasn’t deported,” she says. “It’s not just about one’s geographic location or the language; it's something universal and eternal.”