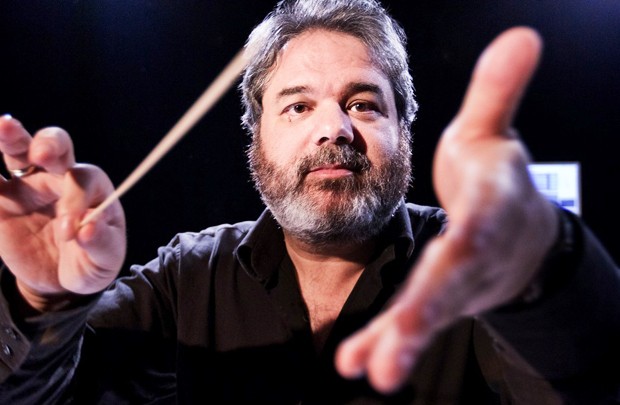 “It is not that we are obsessed with finding meaning,” says Sandeep Bhagwati, an associate professor in the Department of Music  and the Department of Theatre. “We cannot help it.” | Image courtesy of matralab

One of the distinguishing features of the new Milieux Institute for Arts, Culture and Technology is its interdisciplinary nature. Here, researchers in the Media History cluster, Eileen Holowka and Hilary Bergen, interview Sandeep Bhagwati from the Performance, Immersion and Interactivity cluster.

Bhagwati is the Canada Research Chair in Inter-X Art Practice and Theory and director of the matralab (Music/Movement/Media Art Theatre/Theory Research Agency Laboratory).

Holowka and Bergen describe the encounter in their own words.

“Chaos has to mean something. The avant-garde is always a moral argument.”

Sandeep Bhagwati sits across the table from us, and we’re frantically scribbling down his words. Every one of our questions produces an answer like an aphorism: “Ninety-nine per cent of everything is bad, but that doesn’t mean it is meaningless.”

The Milieux Institute for Arts, Culture and Technology at Concordia that houses matralab may be new, but Bhagwati has been dreaming about matralab since 1992. “I had the name before the acronym,” he admits with a smile. “Matra,” he explains, is an Indian unit for time in music. “Like a beat,” he says, tapping his pen on the counter. “Except it is not the beat, but the space between.”

matralab is a space of multiplicities. Bhagwati describes it as not merely interdisciplinary, but “inter(x),” where the x represents disciplines, cultures, media and everything in between.

The name is also an acronym that reveals the potential of the space: M (music, movement and media), A (art), T (theatre and theory), R (research), A (agency).

The key to matralab, and especially matrabox, the lab’s blackbox studio, is its flexible space. Equipped with a dance floor and a powered lighting grid, matrabox is open for a myriad of possible projects. “One week it is full of tech, and the next, there is an artist who just wants to sit in the middle of the room, in the dark, with absolute silence.”

An Indian-German-Canadian conductor, theatre director, university researcher, curator, performer, visual artist and writer, Bhagwati himself occupies many in-between spaces. When we ask about his roots in classical music, he tells us he actually started in music with a rock band called Macbeth. “It was the 70s!” he says with a laugh.

Bhagwati’s current project with matralab is “:body:suit:score,” a research-creation piece that will be completed in 2018. The project is born out of a desire to disrupt the traditional formation of “frontal opposition” between musicians on stage and the audience facing them, he explains. Of course, the theatre is set up this way to facilitate acoustics, harmony and communication between musicians, but what if we could “unmake those decisions” in a conscious way?

The bodysuit itself was designed in collaboration with Concordia’s Joanna Berzowska of XS Labs, also part of Milieux. For Bhagwati, the suit is a “universal tool” intended to help “unmake” traditional conceptions of performance.

It works like this: the suit is rigged with a system of wires and sensors that monitor the musician’s heart rate, sweat glands and motion — all “performance-related data,” which is collected and transmitted to the composer wirelessly.

This scheme requires the musician to learn a choreography of responses in which their instrument and their body become one. But the musician is not a “puppet or a slave.” They have free will and can choose to acknowledge the signal sent to them (or not) and perform it when they choose.

In some respects, the bodysuit is an equivalent to the concert hall in that it connects and coordinates musicians, though not spatially but corporeally. Together, the audience, the hall, the suit, the iPad and the musician form a network, a “fragile disequilibrium” in the image of society.

Bhagwati does not credit these networks and connections to technology alone. Humans and bodies are essential to his practice. He asks us to imagine a performance by computers, for an audience of computers, with nary a human in sight.

Although this kind of configuration intrigues him deeply, Bhagwati believes that technology only brings people together if they know a human has been involved in some way. A chaotic art display only works if “people think that chaos was made for them. That someone gave it a lot of thought, even if it may seem random now.”

Find out more about Milieux Institute for Arts, Culture and Technology’s Performance, Immersion and Interactivity cluster.