The smart(phone) solution for urban mobility

“International collaborations can play a role in helping developing countries take advantage of leapfrogging technologies to plan their own transportation systems.”

Whether you’re waiting for a bus that seems like it will never show up, or experiencing a sudden power outage on the subway, you are not alone: public transit woes are common around the world.

New research from Concordia uses mobile technology to map routes, calculate travel times and help alleviate some of the most pesky transport issues.

Getting around in the developing world

While transportation troubles might seem particularly painful in Western urban centres, they can be even more keenly felt in the developing world. That’s why one of Zachary Patterson’s former students — now with the Agence française de développement — contacted him to map the public transit system in Ghana’s capital, Accra.

Patterson, an associate professor in the Department Geography, Planning and Environment, hopes the results of his project will help Western municipalities see how they can learn from these experiences in Africa.

“Cities in the developing world face a common challenge when trying to better organize their transportation systems: they don’t have accurate information about the transportation network that already exists,” says Patterson, who holds the Canada Research Chair in Transportation and Land Use Linkages for Regional Sustainability.

“Because data collection is a complicated and costly exercise, city officials don’t have the resources to thoroughly review their network,” he says. “That’s why using inexpensive, readily available mobile technology is such a valuable tool.” 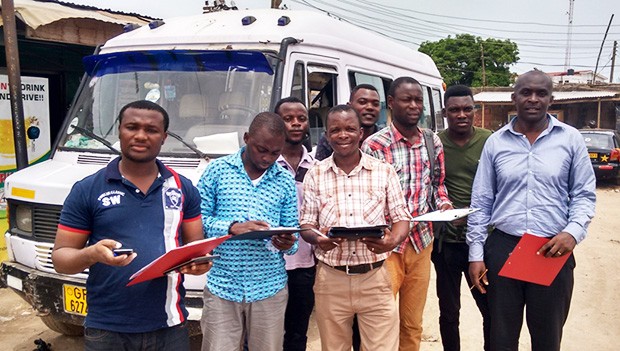 The trouble with trotros

At the heart of Accra’s transit system is a fleet of small public transit buses known as trotros. The Accra Municipal Assembly has been working with AFD for a number of years to better regulate the trotro system.

Initial regulatory steps identified and licensed routes, but the number of routes in operation and their actual itineraries, remained unknown.

That’s where Patterson, a former transportation planner with Agence métropolitaine de transport in Montreal, came in. Accra’s Department of Transport (DoT) and the Agence française de développement undertook a survey of the city’s trotro routes armed with GPS-enabled smart phones to map the city’s transit network with a very limited budget, and a short time frame.

Using two mobile apps, DataMobile, which Patterson had initially developed at Concordia to map transportation habits in Montreal, and Tap Log, surveyors rode the trotros while recording GPS points and logging stops along the routes. The recorded data was then processed and analyzed by Patterson’s research team back in Montreal.

The results were surprising for both Patterson and Accra’s city planners. They found that the transit network was full of “ghost routes”  — pathways that had been claimed by drivers but that weren’t in use.

“Drivers would preventatively register routes that they thought would one day be profitable in order to have a monopoly on them,” Patterson says. “Registering a route gives a driver the exclusive right to operate it, so that they can make sure that no competing driver can scoop them in the future.”

These ghost routes were an important discovery for the DoT, as it provided a clearer sense of the actual extent of trotro services — 315 active routes instead of the originally claimed 580.

What’s best for the West?

The AccraMobile project was recently presented at the 95th annual meeting of the Transportation Research Board in the United States.

“This study shows how international collaborations can play a role in helping developing countries to take advantage of leapfrogging technologies to plan their own transportation systems,” he says.

This research was partially funded by the Social Sciences and Humanities Research Council of Canada.