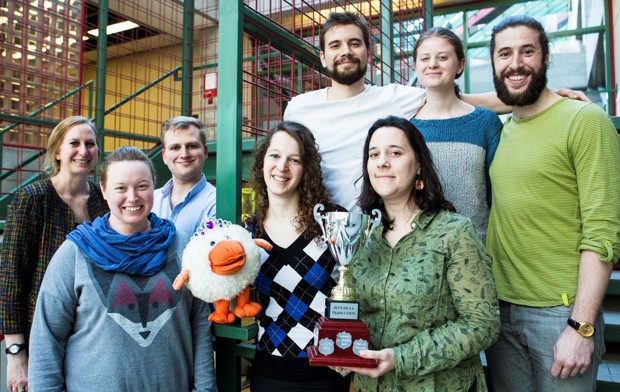 A winning tradition: last year, Concordia’s team of translators was the first in the 10-year history of the Jeux de la Traduction to win all of the competition’s individual and team prizes.

To the untrained eye, the fact that Concordia’s master’s in Translation Studies students will soon have their training recognized by the Ordre des traducteurs, terminologues et interprètes agréés du Québec (OTTIAQ) may not seem like a big deal — but for professors and students in the Département d'études françaises, it’s a coup.

Membership in the professional order of OTTIAQ, which represents the province’s translators, terminologists and interpreters, is not mandatory to work in Quebec or elsewhere.

However, many industries in Canada that are major employers of translators and other language professionals — government, law, medicine and finance — often require certification by an order such as OTTIAQ.

“I think that people believe from the public point of view that if you are a certified translator, you are a better translator than one who is not,” says Danièle Marcoux, an associate professor in the French department and academic advisor for translation students.

And having an education approved by OTTIAQ speeds up the membership process post-graduation.

Previously, only Concordia’s undergraduate degree in translation  was recognized by the order.

A new MA in translation

When the French department first launched its master’s degree in translation in 2014, students approached Marcoux and Philippe Caignon, who was chair of the department at the time, about accreditation.

“They started to tell us, ‘It would be nice if we could have a degree that is recognized by OTTIAQ,’” Caignon says.

The master’s in translation program at Concordia received its letter of acceptance in late November. The process — creating the master’s program and getting OTTIAQ certification — took five years.

When the master’s was created, existing diploma students were offered the chance to transfer into the longer program, along with all of their credits. More than 40 transferred.

The fall 2015 cohort of first-year students, therefore, was the first real test of the graduate program’s viability. Marcoux, Caignon and the department's current chair Denis Liakin were pleased to see more than 40 new students enrolled in the master’s program with very little advertising.

Marcoux says the administration was worried the creation of the master’s program would have a negative effect on the shorter diploma program.

That hasn’t been the case, though. She says the one-year diploma, which is not recognized by OTTIAQ, is still very popular.

“We have a lot of international students who are taking a one-year sabbatical and they want to complete their whole program inside of one year,” she says.

“In a French-speaking environment like Montreal, I thought it would balance the weight of the two languages if I went to an English-speaking university,” she says.

Equipped with two master’s degrees from European universities and having worked as a teacher abroad, Vergne says Concordia is the first school she’s attended where she feels a sense of community and a distinct openness from professors.

The master’s program has been good for Vergne, who is looking to embark on a second career.

“I made a brilliant choice, because Concordia, translation-wise, is extremely good,” Vergne says.

The next frontier for the department, Caignon says, will be to create a graduate program for its languages section, as well as develop an interdisciplinary PhD program that marries the three sections of the French department — literature, translation and language.

The recent and ongoing developments in the department have been profoundly encouraging for its directors and professors.

Find out more about Concordia’s MA in Translation Studies, offered by the Département d'études françaises.