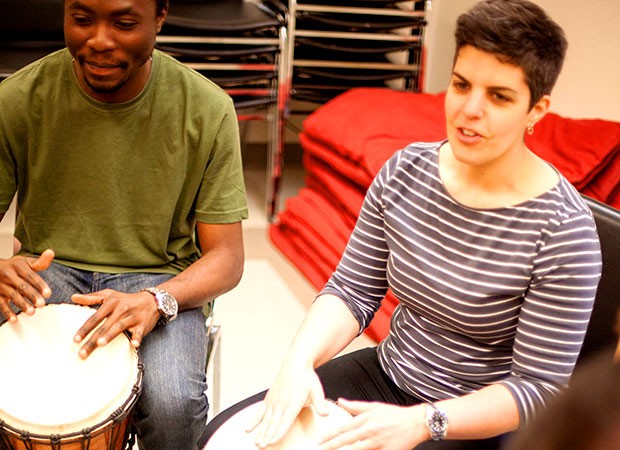 “We live in a multi-faith society,” says Laura Gallo, interfaith facilitator at the Multi-faith Chaplaincy. “Concordia, although it’s secular, is a multi-faith and multi-cultural place where all kinds of people are hanging out together.” | Thumbnail image courtesy of Neal Rockwell.

The rhythmic beat of the drums allows students to explore the power of non-verbal communication.

Every Tuesday at 3 p.m., a dozen or so students come together to explore percussive rhythms at Concordia’s Multi-faith Chaplaincy. Everyone is welcome, and the centre provides hand drums, although some students bring their own.

Laura Gallo, interfaith facilitator at the chaplaincy, is a drummer herself. She initiated the circle because she found a spiritual connection in the heartbeat-like resonance of the instruments.

“The life of a student can be so cerebral, and drumming offers a different way of being,” she says.

After receiving her master's degree in Religion from Concordia in 2008, Gallo joined the Multi-faith Chaplaincy to develop a new service for the university community. She guides students through an interfaith dialogue, helping them to open their minds to a spirituality that exists outside the traditional conventions of religion.

Gallo's work — part of the chaplaincy’s move to change the way spirituality is perceived among students — has even attracted the attention of the Oprah Winfrey Network.

Ellie Hummel, chaplain and coordinator, says her colleague’s position has added a lot to the department and helped evolve the image of the chaplaincy.

“Gallo can reflect critically with students about religion and also in an engaging way,” says Hummel.

Through her studies Gallo reached a level of expertise in religious scholarship. But today, she doesn’t associate with any particular faith.

At the chaplaincy, she works closely with students, not as a religious leader, but as someone who can offer contemplations on faith and spirituality.

Laura Gallo with Martin Luther King III at a United Nations International Day of Peace event in Montreal on September 21, 2015.

“We live in a multi-faith society,” Gallo says. “Concordia, although it’s secular, is a multi-faith and multi-cultural place where all kinds of people are hanging out together.”

In a program called Sacred Sights, Gallo gives a group of students the chance to visit different places of worship around the city in order to learn about the various faiths that we encounter in our daily lives. So far this semester they have visited a Mormon temple and a Buddhist temple.

When she isn’t working with students, Gallo is often asked to facilitate interfaith evenings around the city. Her role during these events is to guide the discussion between guests.

“I’m kind of like a vehicle,” says Gallo. “The job of a good facilitator is to notice the voices that aren’t being heard.”

Earlier this year, she was invited to facilitate an evening with Martin Luther King III, who was receiving a humanitarian award on the UN's International Day of Peace in Montreal.

Interfaith dialogue is “about encouraging people to talk,” she says.

Join the drum circle every Tuesday at 3 p.m. at the Multi-faith Chaplaincy at the Z Annex (2090 Mackay St.) on the Sir George Williams Campus.

Find out about other activities and events at Concordia’s Multi-faith Chaplaincy.