Quebec’s universities gain access to a trove of Geospatial Data 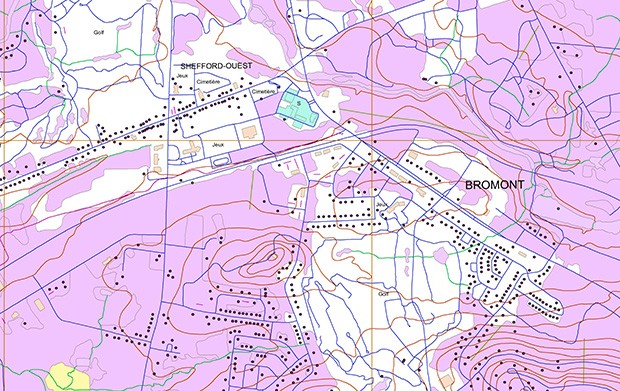 The third week in November is Geography Awareness Week. And today, November 18, is Geographic Information Systems (GIS) Day, “recognized internationally as an opportunity for GIS users to demonstrate how the technology is being used to make a difference in our society.”

What better occasion to announce a new agreement between Quebec’s universities and the Ministère de l’énergie et des ressources naturelles (MERN) that provides unprecedented access to a wide range of geospatial data products?

The agreement, negotiated by the Bureau de coopération interuniversitaire (BCI), means that a large trove of government information — road and address networks, topographic maps, cadastral and LIDAR data, and orthophotos (geometrically corrected aerial images) — will now be readily available to researchers at the province’s post-secondary institutions.

“By increasing access to almost all geospatial data produced by the Quebec government, this agreement will make it easier to advance research and scholarship in Quebec,” says Beaudry.

Geospatial data is anything that identifies geographical features and boundaries on the planet. This includes the coordinates and topology of natural structures, construction projects, oceans and more. It’s often assessed, manipulated or analyzed using Geographical Information Systems (GIS).

Guindon says the use of GIS across disciplines is booming. “So, anyone who may need to look at aerial photos, elevation data, road networks and detailed topographic maps will benefit tremendously from these newly available datasets.”

André Roy, dean of the Faculty of Arts and Science, says the announcement is great news for students and researchers across numerous departments. “It will enhance our ability to represent, understand and solve a wide range of problems related to the environment and to our society.”

Some of the newly available datasets cover the whole province of Quebec, and the resolution is superior to what was previously available from the federal government.

Pascale Biron from the Department of Geography, Planning and Environment says this is important, because students who may have previously chosen to focus their research on other areas, including the United States — for which geospatial data was more readily available — will now be more likely to conduct their projects locally.

“It’s an opportunity for everyone to get to know their environment a bit better, and it's only positive to make sure that such data are available,” she says.

Discussions with the government were a collective process, involving major contributions from colleagues from other universities. With the support of researchers, both librarians and civil servants at MERN worked together towards the common goal of improving access to geospatial data.

For her part, Beaudry says she’s proud of the role played by the province’s university library system in supporting access to geospatial data.

She adds that, for Concordia, the initiative fits in well with the new strategic directions.  “By improving our local and global understandings of populations, places and communities, this new agreement contributes to the conditions that will help us double our research and teach for tomorrow.”

Find out more about Concordia’s Libraries.