The organist, conductor and academic is remembered as a “pillar of Canada’s early music scene” in an obituary published in Le Devoir.

Jackson joined the Department of Music as a full-time faculty member in 1978. He assumed several administrative roles, including dean of the Faculty of Fine Arts from 1994 until 2005.

Close friend and colleague Liselyn Adams, current chair of the Department of Music, served as associate dean under Jackson. She remembers his singular drive to improve the faculty. “He brought it into a more modern university footing ... He was a brilliant leader in his own quiet way,” she says.

In the late 1990s, Jackson worked with the dean of Engineering at the time, Nabil Esmail, to come up with a plan for what is now the Engineering, Computer Science and Visual Arts Integrated Complex (EV) Building. Both faculties were keen to upgrade their facilities.

In an interview with Concordia magazine in 2005, just before the official opening of the EV Building, Jackson hinted at how important interdisciplinarity was in his vision for the faculty. “It changes everything when you put people together. The possibilities for all kinds of joint ventures emerge that nobody knew about.” 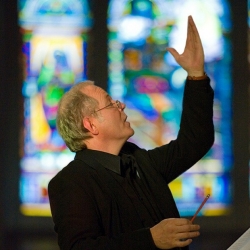 Clarence Epstein, senior director of Urban and Cultural Affairs, worked with Jackson throughout the project’s planning and implementation phase. “Christopher saw the future of Fine Arts beyond just the classical educational model — one where we were seeing the introduction of technology and art in all its forms as being more critical to an art education.”

Jackson worked hard to bring the different Fine Arts departments closer together. “That connection and the idea of scholarship that went beyond your own narrow discipline was very important to him,” Adams says.

As director of the Grey Nuns project, Jackson was also very supportive of Concordia’s successful negotiations to purchase the large heritage structure on René Lévesque Boulevard.

“An appreciation of the historical was a huge part of his personality and his career as a musician,” Epstein says. “The Grey Nuns acquisition brought to the downtown campus this valuable and rich part of Quebec’s heritage that now Concordia could steward.”

As a musician and conductor, Jackson was widely recognized as one of Montreal’s leading figures in the international early music scene. He co-founded SMAM in 1974, at a time when the movement to revive early music, played on the original instruments, was taking off in Europe and North America.

“He was front and centre of that movement in Montreal,” says Adams. During its beginning years, the studio was an orchestra as well as a choir, and Adams joined as a baroque flutist shortly after moving to Montreal in 1977.

As the orchestra’s leader, Jackson was exceptional, Adams says. “He was the kind of conductor that inspired everybody. I think that's what made him a good administrator as well — his ability to pull everybody's best out of them, and bring them into the vision that he had.”

On occasion the two friends would perform as a duet, Jackson on harpsichord and Adams on the flute. He was an amazing musician, she recalls. “We had a blast playing together. It was easy, it was fun, it worked and we didn't have to talk a lot. It was one of those musical relationships that gets way below the skin.”

Jackson was elected a fellow of the Royal Society of Canada in 2009, in recognition of his contribution to music. He leaves behind his wife, trombonist Dominique Lortie, and their three sons, Mathieu, Simon and Nicholas.

Those who desire may make a memorial donation to his life's work: the Studio de Musique Ancienne de Montréal, or Concordia's Faculty of Fine Arts, via the Christopher Jackson Fund.

Celebrate the music and the memories of Chris Jackson with the Faculty of Fine Arts on December 2, 2015 at 5:30 p.m. at the Oscar Peterson Concert Hall (7141 Sherbrooke St. W.)