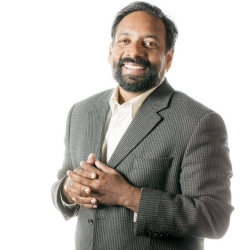 Muthukumaran Packirisamy is not your average mechanical engineer.

He doesn’t work on airplane engines or large machinery. Instead the professor in Concordia’s Department of Mechanical  and Industrial Engineering has dedicated his life to the miniaturization of diagnostic tools used in health care to detect cancer and other illnesses that may be lurking in a person’s bloodstream.

His research has earned him a top honour in Canada — membership in the Royal Society of Canada’s College of New Scholars, Artists and Scientists.

The college was formed in 2014 to recognize intellectual leaders and pioneers from a variety of fields in the country. Concordia professors Steven High, Erin Manning and Vincent Martin were included in the inaugural cohort of 91 members from across Canada.

“I’m very proud to be part of the Royal Society of Canada College,” says Packirisamy, whose new title is the Concordia University Research Chair in Optical-Bio Microsystems.

Since arriving in Montreal 13 years ago, Packirisamy has been working on bio-microsystems at Concordia. These miniaturized and integrated devices are used for biological or biochemical purposes.

Packirisamy has done groundbreaking research on “Lab on a Chip,” a bio-microsystem that is a one-by-one-inch chip made up of many tiny elements that can, for example, allow people to do at-home blood testing.

“My technology will eventually be useful in bringing hospitals to homes,” Packirisamy says.

He’s also looking beyond diagnostic tools to motion sensors that could potentially be used in seniors’ residences to detect falls, as well as other tools to capture biological data or fluids that could then be sent to a doctor for analysis.

The possible uses for Lab on a Chip are many, but for Packirisamy the goal of his research is twofold: empowering people to take responsibility for their own health and reducing the load on the medical system.

His research also has an application in the fight against cancer. He and graduate students at the Optical-Bio Microsystems Laboratory and ConSiM, which stands for Concordia Silicon Microfabrication facility, have shown that using a microtechnology made up of nanomaterial is an influential diagnostic tool.

“Sometimes cancer cells don’t want to come near nanomaterial, so I can catch all the cancer cells, trap them and take them out,” he says.

Recently Packirisamy worked with a colleague at Université de Montréal to use Lab on a Chip to study how sperm from a pollen tube finds the ovule of a flower. The flower-cell study showed Packirisamy the potential for human-cell capturing.

Studying cells to improve the technology used to save humans may sound mechanical to a certain degree, but this research is deeply rooted in and inspired by nature.

Packirisamy’s work taps into the essence of what it means to be an organic being — something living and breathing on this planet.

“That’s really why I’m in this field,” Packirisamy says.