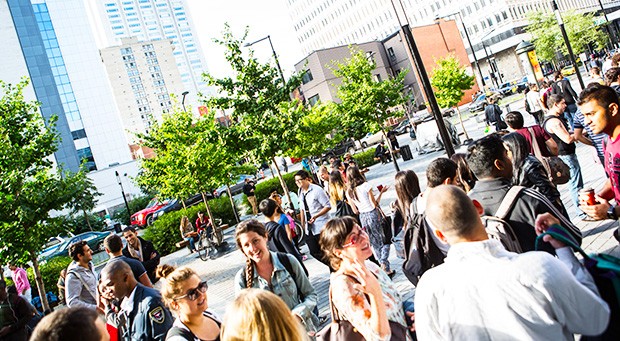 Concordia has again improved in the QS World University Rankings, rising to the 411–420 range from last year’s position in the 461–470 range.

This puts Concordia in the top 50 per cent of the international universities that made the exclusive cut to qualify for 2015’s edition.

The upward move is in large part due to an increasingly high number of faculty research citations and high employer satisfaction with graduates.

Worldwide, 891 universities were evaluated for this year’s QS rankings. Concordia’s results for the criteria used by QS are as follows:

Concordia has also surged upward in the rankings among Canadian universities to reach the 16th position — from 19th place last year — in a field of 26.

High scores for its proportion of international faculty and students, as well as employer satisfaction with alumni helped improve Concordia’s national ranking.

For Benoit-Antoine Bacon, provost and vice-president of Academic Affairs, the rankings’ recognition of researchers’ increased presence and influence in scholarly publications is welcome news.

“We are world-class in an expanding number of research fields, and it’s gratifying to see the QS rankings confirm our increasing impact. It bodes well for our stated strategic direction to double our research,” says Bacon.

Once again this year Concordia has a strong showing in the Faculty Area Rankings with Arts & Humanities figuring in the top 300 globally, and Engineering & Technology and Social Sciences & Management ranking in the top 400.

The Faculty Area Rankings are based on academic reputation, employer reputation, faculty research citations and a measure of the productivity and impact of the published work of a scientist or scholar.

There are more than 18,000 universities in the world. The 2015 QS World University Rankings considered 3,500 of them; it then ranked 25 per cent of those in a pool of 891 institutions.