Concordia research finds that today’s ‘classroom’ is bigger and better than it ever was, for all the right reasons
|
By Marc Weisblott 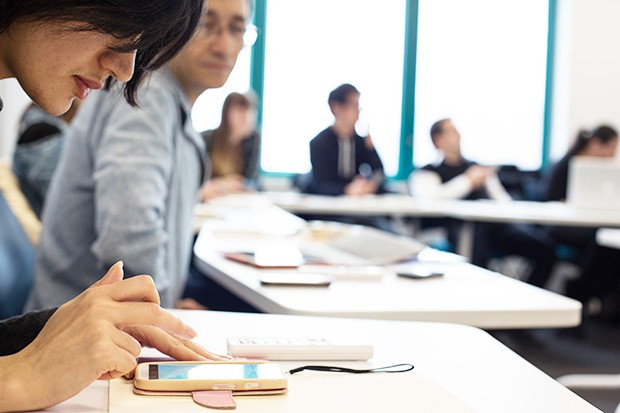 Students heading back to school can always count on one thing: Technology will be a little bit more advanced than it was last year. After all, 21st century learning experiences are increasingly enhanced by gadgets and software, and the ability to plug into worlds beyond the classroom.

A recent Concordia University study concluded that these developments benefit formal postsecondary instruction too. Yet they are no substitute for everyday student engagement and collaboration among students.

The study, published in Computers & Education, was the culmination of 20 years of analysis of 1,105 courses dating back to 1990, the year that spawned the World Wide Web.

Concordia researchers Robert Bernard, Eugene Borokhovski and Richard Schmid were part of a team that probed how things changed over two decades: from PowerPoint presentations to virtual reality; from when computers ran on floppy disks to every student packing a smartphone.

They found that the most obvious positive impact of technology on education was reflected in cognitive tools that helped show what was being studied — like a demonstration of how a cell divides, or the details of the internal organs of a medical patient.

“Students can now look at images and manipulate things that would previously have been impossible to engage with in any other way,” says Bernard. “They allow you to accidentally blow up a laboratory without killing anyone.”

The Internet has also allowed students to take control when it comes to exploring information and ideas. But how much information can anyone absorb just by looking up web pages at random?

“The best instruction is structured and meaningful,” says Borokhovski. “Being guided by a teacher, while sharing ideas and experiences with peers, motivates you to be proactive in ways you can’t do alone.”

Concordia research also concluded that ongoing face-to-face communication with fellow students is still a critical aspect of college or university learning. Peers can stay in contact more conveniently than ever, but relationships are forged within the common study environment — something that is more difficult to replicate online.

“Students learn a great deal from each other,” says Schmid. “They can’t be a sole source of knowledge, but nor is it a case of the blind leading the blind. Plenty of learning comes from having the ability to exchange ideas and challenge one another’s thoughts.”

Moreover, campus life continues to have a profound influence on individual growth, which extends to society as a whole. “You can’t underestimate the credibility that comes with the experience,” says Schmid. “It remains a very important social step.”

So, even if every detail that’s presented to college or university students is just a Google search away, the post-secondary institution is at no risk of losing its inherent value.

“Consider how much effort it takes to learn beyond the obvious,” says Bernard. “If you really want to learn how to write code or be a doctor, or any of the things that require time and effort, there’s a reason that these complex skills don’t come naturally to everyone.”

“People may have illusions that technology is making things easier and easier when it’s quite often the opposite,” says Borokhovski.

“When the Internet was first introduced, it added value to the learning process, but that surge didn’t continue with each new development. We have to focus learning to a greater degree now, rather than jumping from one trend to another.”

Find out more about the Systematic Reviews Team of the Centre for the Study of Learning and Performance (CSLP) at Concordia.