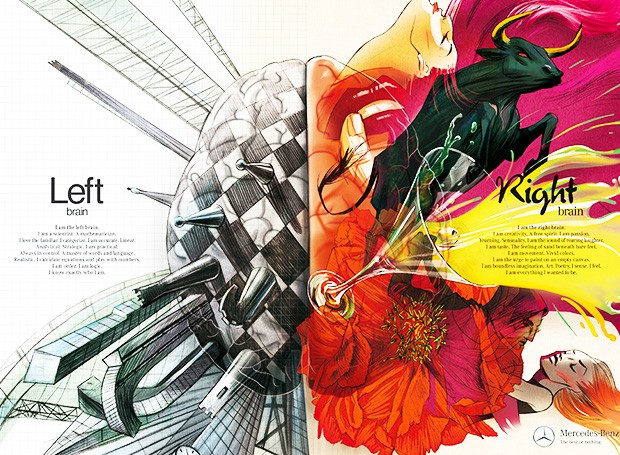 As the theory’s originator Roger W. Sperry said when he accepted his Nobel Prize in 1981, "The great pleasure and feeling in my right brain is more than my left brain can find the words to tell you."

However, more recent studies seem to indicate that this distinction is far from set in stone. A science writer for NPR summed up the new direction in 2013:

One highly publicized paper, summarized at The Guardian, failed to find evidence that individuals tend to have stronger left- or right-sided brain networks … A book by Stephen M. Kosslyn and G. Wayne Miller argues that the left / right brain divide is largely bogus, and should instead be replaced by a top brain / bottom brain distinction.

Christine Beckett, an associate professor in Concordia’s Department of Music, bucked the trend as far back as 2008, when she presented research indicating that the human brain isn’t as clearly separated as we once thought — particularly where her specialty is concerned.

"With music, the brain lights up like a Christmas tree on both sides," she said. "It calls on the whole brain.”

The findings stem from Beckett’s ongoing work with the International Laboratory for Brain, Music and Sound Research (BRAMS), a collaboration of universities devoted to the study of music cognition with a focus on neuroscience.

"There's a lot we don't know," she said. "It's a field that's only been around for 20 or 30 years, and there are still many questions to answer."

In fact — research by Virginia Penhune, chair of Concordia's Department of Psychology and a founding member of BRAMS, suggests that musical training before the age of seven has a significant effect on brain development.

According to a study published by the Journal of Neuroscience, test subjects who started lessons at a younger age had stronger connections between motor regions, which are the parts of the brain that help you plan and carry out movements.


Find out more about Christine Beckett, Virginia Penhune and the International Laboratory for Brain, Music and Sound Research (BRAMS).