Hard at work helping the country’s next sports stars 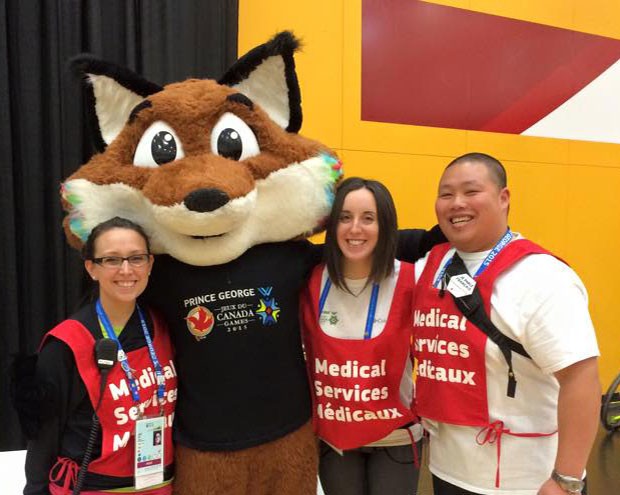 Clinical supervisor Victoria Robinson: Getting athletes from potentially their lowest point back to normal is such a gratifying experience.”

What do Steve Nash, Sidney Crosby and Catriona Le May Doan have in common? They all competed in the Canada Games on their way to becoming champions in their chosen sport.

Victoria Robinson, a clinical supervisor in the Athletic Therapy Clinic at Concordia’s PERFORM Centre, had the opportunity to treat many promising athletes during the 2015 Canada Winter Games, which took place February 13 to March 1 in Prince George, British Columbia.

She says getting the opportunity to work with so many different sports, and seeing young adults who may one day end up at the Olympics, were the highlights of her experience. “There was excitement in the town.”

Held every two years, alternating between winter and summer, the national tournament gathers together young amateurs from across the country to compete for the Canada Games Flag and Centennial Cup. It’s a key annual event in the development of the country’s top young athletes.

Since the first edition was held in Quebec City in 1967, Nearly 50,000 athletes have participated in the Games, supported by 90,000 coaches, officials and volunteers.

Robinson has a passion for helping athletes who have suffered an injury get back on the field. “Knowing that you’ve played a vital role in the process of getting athletes from potentially their lowest point back to normal is such a gratifying experience,” she says.

The PERFORM Athletic Therapy Clinic is unique due to its strong focus on education. Student interns are able to treat actual clients from start to finish under the supervision of Robinson and her fellow certified athletic therapists.

“Our job is not to manage, but really to be there for support, so that students can learn to be the best athletic therapists they can be,”tsays Robinson.

How can aspiring athletic therapists be part of an experience like the Canada Games? It’s simple, Robinson says. Put yourself out there. “Once you get certified, take any little job you can get, because you never know where it will take you. Before you know it you’ll have made connections that may lead to bigger and better things.”