Oral history partnerships, a youth workshop and one group’s fight against elder abuse 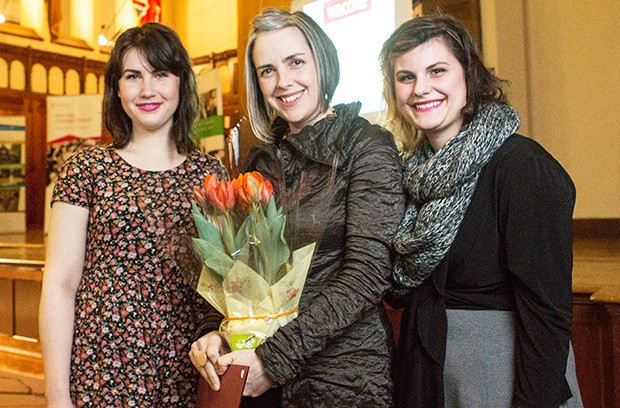 In an age of packed schedules and on-demand entertainment, some people still prioritize their communities. “The people we’re celebrating have gone out and done something, " noted Andrew Woodall, Concordia's dean of Students, during his opening remarks at the annual Concordia Council on Student Life (CCSL) awards gala.

Engaged scholars in the community

This year’s ceremony, held on April 9 in the Loyola Chapel, included a new addition to the roster — the Engaged Scholar Awards — given by the Office of Community Engagement. These awards are the first to honour individuals or groups from outside the university.

“We believe it’s important to acknowledge the contributions of external organizations and the difference they make to student and faculty development,” says Eryn Fitzgerald, community relations coordinator in the Office of the Vice President.

One of the three Engaged Scholars Awards went to Respecting Elders: Communities Against Abuse (RECAA), a volunteer organization that raises awareness about elder abuse among senior groups.

RECAA is made up of elders from diverse ethnic backgrounds who use Augusto Boal’s interactive Forum Theatre techniques to inspire dialogue and empower audiences. The group also holds digital literacy workshops in partnership with the Ageing, Communication, Technologies project (ACT), run by professor Kim Sawchuk in the Department of Communication Studies.

“This award is very meaningful to us,” said Anne Caines, a volunteer with RECAA. “We have a long and fruitful relationship with Concordia through the ACT project. When we were first introduced to them, we were very hesitant. Digital literacy? But we wanted to document our history, and we were profoundly surprised at how exciting it’s been ever since.”

The other Engaged Scholar Awards went to Lynda Szabad Smyth from the Department of Art Education and Shyam Anandampillai.

The CCSL confers its Outstanding Contribution Awards to students, faculty and staff for work that has had a positive impact on student life. Among the seven winners this year was Cynthia Hammond, chair of the Department of Art History, who was honoured for “Right to the City” — her place-based teaching project in the working-class area of Pointe St. Charles.

Hammond describes the project, co-led by Steven High and Edward Little, as “Academia embedded in community: it’s a way of living our politics.” The project took groups of students into the southwest neighbourhood to collaborate with community members on the creation of a documented oral history of the area, which will be published this May.

Upon receiving her award, Hammond invited Katrina Caruso and Laura O’Brien, the two students who had nominated her, to join her on stage and share the award. “This is in deep gratitude for one of the greatest teaching experiences of my life,” she said.

Student Services’ LIVE Centre gave out six Volunteer Recognition Awards at the gala as well. This is the sixth year that the LIVE Centre has been recognizing students, staff and faculty who have made a difference at the university through volunteer work.

Among the honourees was Natalie Malo-Fletcher, a student in the PhD in Humanities interdisciplinary program. Fletcher was recognized for her work as director of Brila Youth Projects, an organization that helps foster empathy, self-efficacy and social responsibility among young people through philosophic discussion and creative exercise.

Her doctoral research looks at moral imagination as an educational capability, and its impact on critical thinking — a subject that dovetails neatly with her work as a volunteer.

“I’m very grateful to Concordia for how much the university has supported me in this work, since I started. Not only in my research, but in helping us do summer programming at Loyola campus,” said Malo-Fletcher, adding that using the campus as a base enables the program to  draw on Concordia students as volunteers. “It’s been really special to be able to do it all through my home university.”

In his final remarks, Woodall returned to an idea he touched on in his introduction — that community engagement generates hope in the world. “In the words of Ram Dass,” he said, “‘We’re all just walking each other home.’”

Learn more about the Concordia Council on Student Life.