Lives of the saints

This month, take a 'hallucinogenic and surrealist voyage' with the Department of Theatre's production of three Erik Ehn plays
|
By Tracey Lindeman

Director Clea Minaker: “The students and I are very excited, honoured and humbled to be able to exchange with an author [Erick Ehn, pictured right] whose work has really challenged us in so many ways.”

The Department of Theatre’s upcoming production of Erik Ehn’s The Saint Plays will take audiences on a hallucinogenic and surrealist voyage through despair, yearning and profound questioning of violence, society and God.

Director Clea Minaker decided to stage three of the 15 short plays contained within the work in a way audience members may find unconventional — through puppetry.

“Working with puppets can be more like dance than like so-called traditional theatre. Movement is precise, choreographed and unnatural,” says Mark Sussman, an associate professor in the Department of Theatre and an associate dean in the Faculty of Fine Arts.

Sussman also teaches puppetry, and it’s perhaps because of his and Minaker’s mutual love of object theatre that he tapped her to direct The Saint Plays, her first production with the department.

“She was, I believe, quite attracted to the crystalline, poetic language in Ehn’s writing, as well as the mix of sacred and profane elements in Ehn’s depictions of saints in his play cycle,” he says.

The three plays Minaker chose for the production are tinged by darkness.

The Freak is a modern take on the mythology of Saint George and his dragon-slaying exploits, told through the surrealist story of a Swedish girl tasked with helping a washed-up knight try to achieve sainthood by any means necessary.

Pain tells the story of Saint Eulalia, a young girl tortured and killed for her Christian beliefs in fourth-century Spain. The tale begins with the mourning parents of a murdered Brooklyn girl who dream of travelling back in time to witness the death of Eulalia. The play hinges on drawing parallels between the deaths of the Brooklyn girl and the Spanish saint. 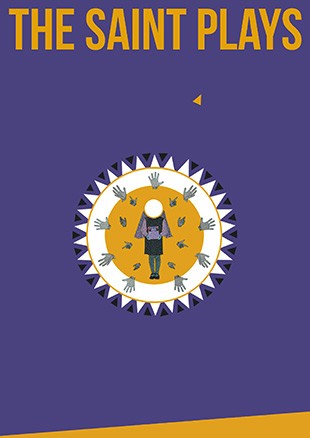 Saint Barbara is at the heart of Radio Elephant, a trippy manipulation of time and space realities. A 13-year-old girl, who is kept in a tower by her father, smuggles in a sage named Bob who teaches her to build a radio. The more she learns, the bigger her head grows, causing her to become disfigured with what could actually be elephantiasis. Multiple scenarios are considered as possible conclusions before her father ultimately kills her.

Minaker chose these plays because of the common thread of violence toward girls and the girls’ position as both potential threats and potential victims.

“I was very drawn to the reading,” Minaker says. “I was very excited by it and also very overwhelmed by it. I find it audacious and extremely challenging, and it challenges our notions of what we expect from narrative, what we expect in theatrical storytelling.”

Three actors will manipulate the puppets employed in the telling of these tales — one for the head, one for the arms and one for the legs.

Nearly 50 objects had to be built for The Saint Plays. Third-year theatre-design student Nicolas Ruzza, who created the puppets and other objects for Pain, says the experience was unlike anything he had ever done before.

“It was a little bit daunting when I was given this position on this show and told I had to design puppets,” he says.

Ruzza struggled to conceptualize the representation of the story and its characters, as well as the violence, through puppetry. Minaker, a seasoned puppeteer who has worked on many experimental projects, helped show him the way.

“Clea was really encouraging and motivating in helping me find my access into the story,” Ruzza says.

Minaker developed a passion for puppetry nearly 15 years ago, and has worked with musical acts like Feist and Kid Koala to produce live shadow and video-based puppetry during their performances.

“I was initially drawn to it from the perspective of somebody who was already quite passionate about theatre in general, but I recognized in puppetry an extra level of intrigue and theatricality and possibility for the object to mediate between the performer and the audience,” Minaker says. “Everybody is participating in the creation of the illusion. It’s a very engaged form of theatre and storytelling.”

She says working with Concordia theatre students has been an engaging process for the infectious nature of their excitement, idealism and willingness to try new things.

Most students don’t get the opportunity to take on a contemporary playwright’s work, let alone meet and engage with the writer. Ehn, however, will be at Concordia on February 18 for a talk coinciding with the opening of the production.

“The students and I are very excited, honoured and humbled to be able to exchange with an author whose work has really challenged us in so many ways,” Minaker says. “It’s not easy writing, and we hope we’ve done it justice.”

Erik Ehn will speak about his most recent commemorative cycle of 17 plays, Soulographie: Our Genocides, at Concordia on February 18, at 5:30 p.m., in the John Molson School of Business building’s theatre studio (MB 7.270).