Leaning in to academic leadership at Concordia

On January 30, the second annual Women’s Faculty Summit aims to take a leaf out of Sheryl Sandberg's book
|
By Linda Kay 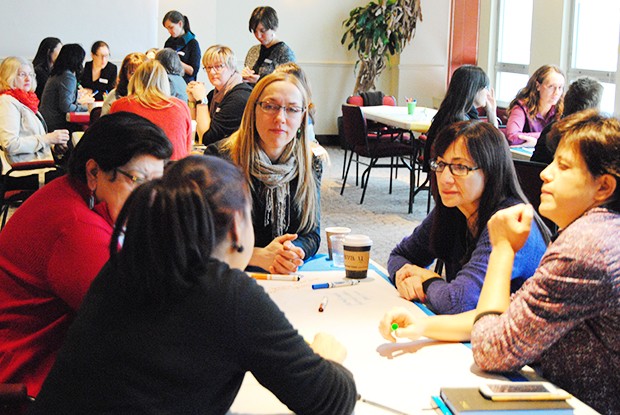 Linda Kay is a professor of journalism, former chair of the Journalism Department and a University Provost Fellow with a focus on faculty development. She is chairing the 2015 Women in Faculty Summit at Concordia.

Facebook CEO Sheryl Sandberg sparked a collective conversation when she questioned why so few women make it to the top of their profession and why the number of women climbing the ladder has actually decreased in the last decade.

She suggested that women may be sabotaging themselves unwittingly.

“Women systematically underestimate their own abilities,” she says. “What are the messages we are telling ourselves?”

Sandberg’s celebrated 2010 TED Talk, “Why we have too few women leaders,” and her bestselling book Lean In: Women, Work, and the Will to Lead provided inspiration for Concordia’s upcoming second annual Women’s Faculty Summit, “Leaning In To Academic Leadership.”

Sponsored by the Office of the Provost, the summit will pursue a theme emerging from last year’s inaugural event, where participants strongly supported a belief that multiple paths to excellence in the academic realm merit recognition.

But numbers don’t reveal what it means to “lean in” to leadership, and they don’t reveal the multiple ways women can “lean in.”

Summit participants will go beyond these figures, as John Molson School of Business professors Kathleen Boies and Linda Dyer present their research on leadership and engage participants in a conversation about the challenges and opportunities surrounding women and leadership in academia. Dyer chairs the Department of Management, while Boies is a research chair in leadership development.

“Embodied Leadership,” an interactive workshop, seeks to explore how voice and body language can be used to “lean in” in an academic setting. It will be led by Kate Bligh, a part-time faculty member in the Department of Theatre, School of Canadian Irish Studies and Department of English.

A panel of notable Concordians will also reflect upon their personal paths to leadership. The participants include Cathy Bolton, vice-provost of Teaching and Learning; Lisa Ostiguy, deputy provost; Genevieve Rail, professor and principal of the Simone de Beauvoir Institute; Paula Wood-Adams, dean of graduate studies; Kim Sawchuk, the university’s newly named associate dean of Research and Graduate Studies in the Faculty of Arts and Science; Maria Peluso, past president of the Concordia University Part-time Faculty Association and part-time faculty member in the Department of Political Science; and Nadia Hardy, new chair of Mathematics and Statistics.

If you are a female academic at Concordia, join your colleagues on January 30 for a thought-provoking discussion and a rare chance to meet women from across the university.