Can yeast and synthetic techniques solve a 10-year-old biological puzzle? 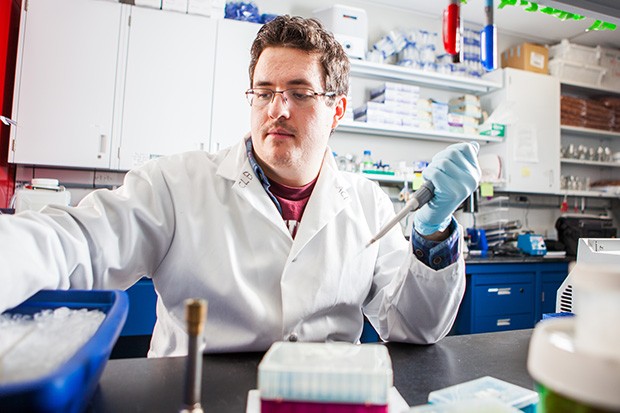 Jeremy Glass-Pilon at the Brett Lab: “There isn’t a full model yet of the entire system that we’re studying.” | Photo by Concordia

Jeremy Glass-Pilon has a passion for medical research. And at the Brett Lab in the Richard J. Renaud Science Complex (SP), a combination of synthetic biology techniques and yeast may hold the secret to this molecular biology graduate student’s success.

The lab, where Glass-Pilon jokingly claims to spend his entire life, studies ion transporters and their involvement in endocytosis — and, ultimately, disease.

Endocytosis is the process by which cells absorb molecules. The Brett Lab focuses on its last step: vacuolar fusion. The researchers use yeast because it shares cellular mechanisms with more complex organisms, so the findings can be directly related to humans.

Glass-Pilon’s work may still be in the preliminary phase, but his aim is to complete a larger puzzle. “There isn’t a full model yet of the entire system that we’re studying,” he says. “We’re trying to complete the model using yeast so we have a better understanding of endocytosis.”

This knowledge could eventually provide the groundwork for the development of therapies for a number of human diseases and disorders related to membrane trafficking — the process by which proteins are distributed in and out of a cell — including autistic spectrum disorders and candida.

“It would be phenomenal to have therapies that target what I’m working with in order to treat these kinds of diseases,” Glass-Pilon says.

Glass-Pilon’s personal research seeks to clarify the role of a particular hydrogen pump, the V-ATPase, during vacuolar fusion. The V-ATPase uses energy within the cell to pump protons in the opposite direction of where they want to go.

In the scientific world, there has been a decade-long debate on the V-ATPase’s involvement in endocytosis, specifically about whether vacuolar fusion occurs due to acidity, or because of the interaction between one V-ATPase with another.

Through a synthetic biology approach, Glass-Pilon is designing a genetic tool kit that allows him to control the acidity (pH) of various compartments within yeast through exposure to different types of light. By artificially controlling pH, he can remove the acidity function and determine whether or not the final step of endocytosis is still able to take place.

“I plan to use the tool kit to put to an end to the debate surrounding the V-ATPase and define its role in endocytosis once and for all,” says Glass-Pilon.

As he explains, light doesn’t normally play a role in these mechanisms. However, the tool kit uses a pump to channel ions or protons across membranes, and “they only shuttle across the membrane when I shine them with light of a specific wavelength.”

“So,” he says, “I can actually introduce these little pores that allow things to travel through a barrier. I can turn them on with light so I can control the amount of things that pass through this membrane, which allows me to control the acidity.”

Glass-Pilon was initially drawn to synthetic biology during his undergraduate studies at Concordia. Then he joined a Concordia team that was participating in the Boston-based International Genetically Engineered Machine (iGEM) competition, an annual synthetic biology “jamboree.”

“Participating in iGEM built my interest in research in general, and in medically relevant research in particular,” he says.

To pursue graduate research, Glass-Pilon needed a supervisor who shared his enthusiasm. He now works with Christopher Brett, an assistant professor in Concordia’s Department of Biology.

“Professor Brett has been guiding me through the development of this project,” Glass-Pilon says. “He is helping me build my passion.”