A summer’s worth of real-world experience 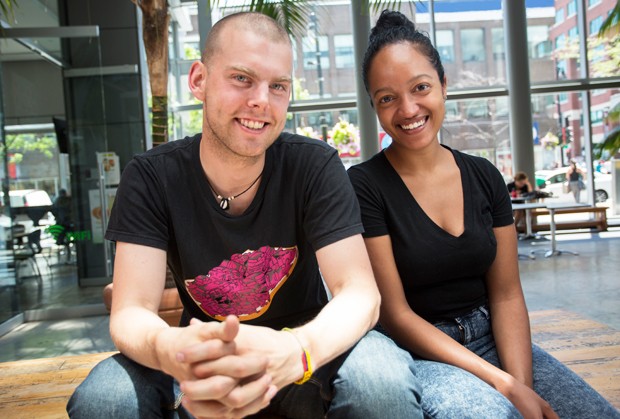 When Co-op students Stephanie Jeremie and Alexandre Hureau found out they had been hired for a summer work term with Montreal’s Equitas – International Centre for Human Rights Education, they weren’t sure what to expect.

“I knew it was related to human rights, and I was really happy, because that’s what I’d like to do eventually. But I didn’t know what our role would be,” says Hureau, who is studying anthropology.

He recalls showing up for his first day: “I was the only intern in the middle of this office, but everybody was so welcoming, so warm and so friendly. I never felt out of place, and they were like that with everyone. It's like a family.”

This past spring, Concordia’s Institute for Co-operative Education expanded to include four new programs in anthropology, sociology, journalism and political science. Jeremie, an honours student in political science, and Hureau, who’s studying anthropology, are among the first 24 students from their respective departments enrolled in the program.

“One of our mandates is to increase the depth and breadth of experiential learning opportunities for students,” said Gerry Hughes, director of the Institute for Co-operative Education, at the time of the expansion announcement.

At Equitas, Jeremie and Hureau were put to work helping with logistics for the 35th edition of the International Human Rights Training Program (IHRTP), the organization’s annual flagship event. Held at John Abbott College from June 8 to 27, it brought 81 professionals from 49 countries together to “build human rights knowledge, skills, attitudes and behaviours.”

The interns’ tasks included helping set up Equitas’ temporary office at John Abbott, picking up participants at the airport, making sure they had what they needed and that they knew where they needed to be.

Although Jeremie and Hureau weren’t involved in planning or delivering the actual program sessions, they had plenty of opportunities to interact with the IHRTP’s international visitors.

Hureau remembers an evening conversation he had over a game of pool with a participant from Greece and another from Afghanistan. What began as a lighthearted chat about the likelihood of getting a ticket for speeding in their respective countries evolved into a more serious discussion on the difficult task of trying to impose a democratic system in Afghanistan.

“We're allowed into this little universe where everybody is hyper-qualified and so passionate about what they do,” Hureau says. “They're all doing amazing things where they come from, and they all have enormous backgrounds in human rights work. Talking with those people and having conversations about what it's like to live in their countries and work in their countries was eye-opening. Some of them even put their lives in danger to be there.”

On top of her assigned duties, Jeremie volunteered to record an interview with two human rights workers from Sri Lanka, who had been the target of threats because of their fieldwork aimed at quelling the simmering conflict between ethnic and religious groups.

“These people were working to find solutions using other outlets — either media or arts or things not necessarily related to the conflict — to bring people together. It gives you a totally new understanding of the way in which issues can be resolved without there necessarily being a political resolution. I was blown away,” she says.

Isabelle Bourgeois, IHRTP coordinator for Equitas, supervised the two interns from Concordia. She praised them for their energy and commitment.

“We were so happy to have them with us this year. They brought a lot of positive energy. They were always laughing but they also had this way of understanding really quickly what our work ethic is all about.”

Looking back on her Co-op work-term experience, Jeremie credits it with opening her up to the possibility of a career in human rights. “Working with Equitas, you witness the change in people, in the way that they understand human rights and in the prejudices that they might have had, even though they work in the field.”

Hureau says his time with Equitas only added to his desire to find a career working with a similar organization. In the meantime, both he and Jeremie plan to stay in touch with Equitas and reapply for a work term there next summer.

“I was fascinated by it before, and now I’ve got a foot into that world,” Hureau says.

If you’re an employer looking for a student to hire, or a student interested in applying to the Co-op program, email the institute at coopinstitute@concordia.ca.

Read the article from the Association of Universities and Colleges of Canada, "Employers see co-op and internship students as valuable source of new talent."