Who are Concordia’s undergraduate ambassadors? 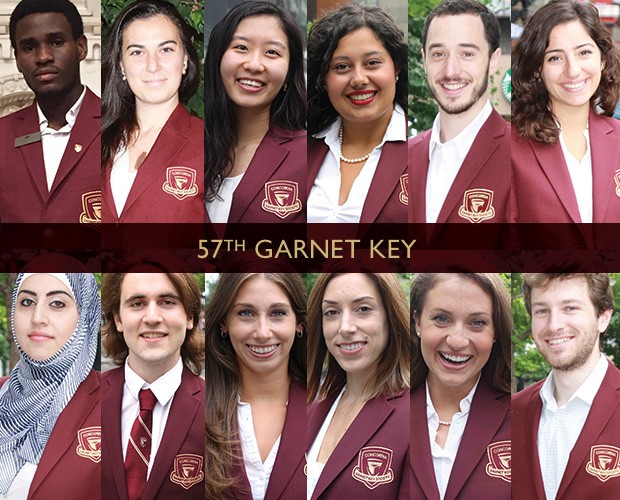 Only a chosen few get to don the maroon blazer of Concordia’s Garnet Key Society. Ever since 1956, when the first 15 Garnet Key members were selected from a group of students nominated by their peers, the society has been an important part of Concordia’s fabric.

Nowadays, the annual cohort of the Garnet Key Society is composed of 12 undergraduate students, chosen on their ability to balance high academic achievement with community involvement. These students act as ambassadors, representing the university at various institutional events, such as lectures, galas and dinners.

Concordia’s president Alan Shepard, the society’s sponsor, says he enjoys getting to know the members each year. “They act as ambassadors, which is a great help. And their presence at major events allows guests of the university to interact with some of our most exemplary students.”

The Faculty Council of Sir George Williams College, one of Concordia’s founding institutions, approved the formation of the Garnet Key Society in 1956. James Yelland, then a third-year Commerce student, was its first president. 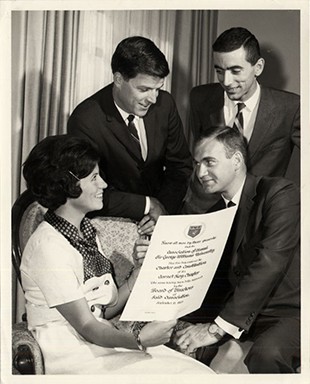 In an interview with The Georgian student newspaper in February 1957, Yelland expressed hope that the Garnet Key Society would be “accepted by the college and by the undergraduates themselves.”

Yelland and his fellow Garnet Key members made their debut at the installation of Dr. Henry F. Hall as the principal of Sir George Williams. They were positioned throughout the college, to guide, usher and offer information to guests, reported The Georgian.

“They were attired in the official Garnet Key uniform; the girls in maroon skirts with white blazers and the Garnet Key crests, while the boys wore white flannels and maroon blazers with crests on the pocket. Their presence lent a dignified note to this formal occasion.”

More than 400 members have joined the Garnet Key Society over the years. The uniforms have changed somewhat — both men and women now wear the society’s signature maroon blazers — but its tradition of service remains the same.

The society's annual mandate includes a major project meant to benefit the community at large. Veronica Tamburro, a member of the 57th Garnet Key Society, has been involved in the planning for the next edition.

“This year’s project is called ‘Forces of Change’ says Tamburro. “It’s going to be something like a debate tournament meets Dragons’ Den. Students of all faculties will be invited to participate and to pitch an idea that they think will influence the future and change the world.”

Gaining admission to Garnet Key is no easy feat. More than 100 letters are sent out by existing members, based on a selection made by the Dean of Students Office. Out of the resulting applications, only 60 students are considered for interviews. Thirty applicants are then selected to attend a cocktail function where their social skills are put to the test.

“During the cocktail, it’s important to speak to each outgoing member of the Garnet Key as they will be helping to choose the next group of ambassadors,” Tamburro says. “It’s also important to make acquaintances with the other nominees.”

Finally, 12 undergraduates are invited to join the society. A Fine Arts major and the society’s current secretary, Tamburro considers herself lucky to have been among those chosen for this year’s cohort.

“It’s a big honour,” she says. “It’s an amazing experience. You get to meet interesting and influential people who can guide you to where you want to take your career — people you might not otherwise get the chance to meet.”

Check out past and present editions of the Garnet Key Society at Concordia.