Karl Polanyi: ‘He’s one of our big thinkers’

In anticipation of the 13th International Karl Polanyi Conference, filmmaker Ilan Ziv explores the legacy of a maverick economist
|
By J. Latimer

If filmmaker Ilan Ziv has his way, the late economist Karl Polanyi will soon be a household name, on par with Karl Marx and Adam Smith.

“In my mind, he’s one of the big thinkers and that’s why it’s so important to make a documentary about him,” says Ziv, who is introducing his new 52-minute film, Karl Polanyi – The Human Factor at the 13th International Karl Polanyi Conference at Concordia on Friday, November 7, 2014. 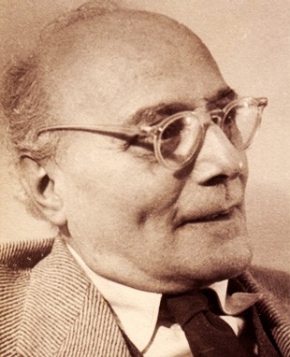 Karl Polanyi. Filmmaker Ilan Ziv says 50 years after Polanyi’s death, his work is more relevant now than it has ever been.

It’s the film’s North American premiere, which is timely because this year marks the 70th anniversary of the publication of Polanyi’s iconic text, The Great Transformation, and 50 years since his death in 1964.

The theme of the November 6-8 conference is “The Enduring Legacy of Karl Polanyi.” Kari Polanyi Levitt, a McGill University professor and the economist's daughter, will be exploring this theme in her opening address; so will papers delivered by more than 60 participants, including Concordia communications professor William J. Buxton, John Molson School of Business professor Paul Shrivastava, and Holly Nazar, a doctoral student in the Department of Communications. Marguerite Mendell, director of Concordia’s Karl Polanyi Institute of Political Economy, is welcoming the guests.

Ziv’s film on Polanyi is the final episode in his six-part series called Capitalism, which was commissioned by ARTE, a European cultural channel that produces sophisticated topics for television.
“ARTE gave me the freedom to choose Polanyi — who, let’s face it, isn’t as well known as Marx,” says Ziv, on the phone from his home in New York.

“But I gave Polanyi a full episode because we need to hear his voice now, more than ever. In the last 30 years, since the so-called neo-liberal revolution, alternative voices have been purged from economic discussion. With the economic collapse in 2008, however, there’s suddenly a hunger for more ideas, more voices.”

Ziv identifies several of Polanyi’s contributions to economic thought that make him particularly relevant today. “In the 1940s, he saw that the calamities of the early 20th century were a result of shockwaves of unregulated, rampant capitalism,” he says.

“Since the collapse in 2008, we now understand what happens when auto-regulated capitalism is left unchecked. We get a society that’s subjugated or colonized by the economy, not the other way around, as it was before the industrial revolution.”

Ziv credits Polanyi for identifying the trigger of that subjugation: the moment in history when human society commodified money, land and labour.

“Capitalism was always seen as synonymous with democracy, but Polanyi questioned that.”

The filmmaker interviewed 23 experts from a variety of disciplines to make his series, including Polanyi’s daughter, the economist Kari Polanyi Levitt

“Because of the tension between society and economy, Polanyi looks at history as a constant clash,” he says.

“Capitalism is always trying to devour society. Society resists and that resistance or pushback is what he calls ‘double movement.’ Isn’t that what’s happening today, by people who are hurt by the environmental destruction, the market and the banks? It explains everything, really.”

Earlier this year, the Karl Polanyi Institute completed the digitization of their archive — an estimated 110,000 pages — with the goal of allowing universal access to its contents. As part of the conference, there will be a reception to celebrate this achievement at 6:30 p.m. on Thursday, November 6.

All conference sessions are being held on the seventh floor of the Henry F. Hall Building (H). The information table will be located in H-765.

Registration is mandatory. Tickets are $100 per day, or $300 for the full conference. Students do not need to register and may attend panels and plenaries free of charge.

Register for the 13th International Karl Polanyi Conference by sending an email to polanyi.institute@concordia.ca. To pre-register, or for further information, please contact the institute at 514-848-8707.