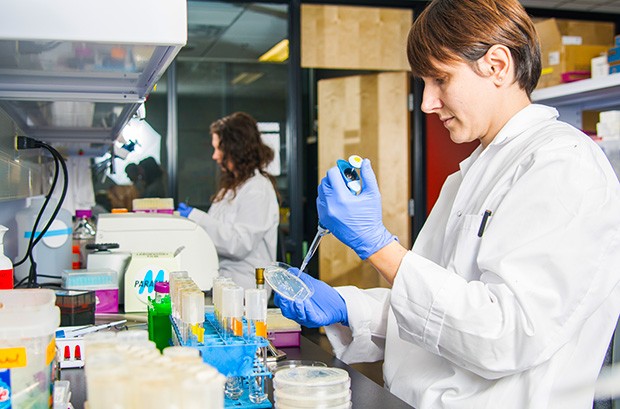 Lauren Narcross and Elena Fossati: A synthetic biology approach to painkiller production could result in medicines that are cheaper, more easily absorbed and potentially less addictive. | Photo by Concordia University

Elena Fossati and Lauren Narcross are hooked on painkiller … research. Specifically, they are investigating alternative ways to synthesize drugs like morphine and codeine at Concordia’s Centre for Applied Synthetic Biology.

Funded by Genome Canada, their research for the PhytoMetaSyn Project aims to develop homegrown medicines that will lessen our dependence on foreign supplies of opium poppies by producing morphine and codeine in Canada. The ultimate goal is to increase the availability of these drugs while driving down cost.

“Right now, the majority of the opium fields harvested for painkillers consumed in Canada are concentrated in Tasmania, Afghanistan and Turkey,” says research associate Fossati. “Large pharmaceutical companies have a monopoly on these. The ability to tap into opium poppies in a controlled laboratory environment right here at home, and to produce medicines more economically is what we’re striving for.”

Fossati and Narcross are hoping that by using a synthetic biology approach to producing painkillers, they can expand the number of drugs available for testing by pharmaceutical companies. Ideally, the result will be drugs with better or different pharmacological profiles that make the medicines more easily absorbed and potentially less addictive.

The general idea behind this science is to take the genetic machinery (DNA) that results in morphine or codeine from opium poppies, and transfer it to everyday baker’s yeast — the simplest organism that can support it. Microbes, unlike plants, are quick to grow and are not dependent on external factors such as weather and pests.

The process is no simple matter.

“A biochemical pathway is like an assembly line,” says Narcross, a PhD student in biology. “What we’re trying do is to take that assembly line out of opium poppies and put it into yeast. The trouble is, we can’t just ask for the plans. It takes a lot of work to figure out how the plant does what it does.”

Through collaboration with colleagues at the University of Calgary, they have a sense of what some of these pathways might look like.

Narcross explains: “Once we have our own assembly lines set up in yeast, then we can look at how to speed up the process. Which workers are too slow? Is someone trying to do too many things at the same time? Do we need to separate two coworkers who talk too much?”

According to Fossati, creating morphine is just the tip of the iceberg for potential medical uses of synthetic biology. “Poppies don’t just make morphine. They also make hundreds if not thousands of other interesting compounds.”

Some of these compounds are known pharmaceuticals such as the muscle relaxant papaverine, the probiotic sanguinarine and the antitumor agent noscapine.

But what about worries that such a process could fall into the wrong hands — Breaking Bad-style — and lead to the illegal production of heroin?

Narcross is not concerned. “This process is extremely complex and the tools necessary to produce these medicines are not widely available. Evidently, their production would come under strict regulations and controls.”

Find out more about synthetic biology at Concordia.