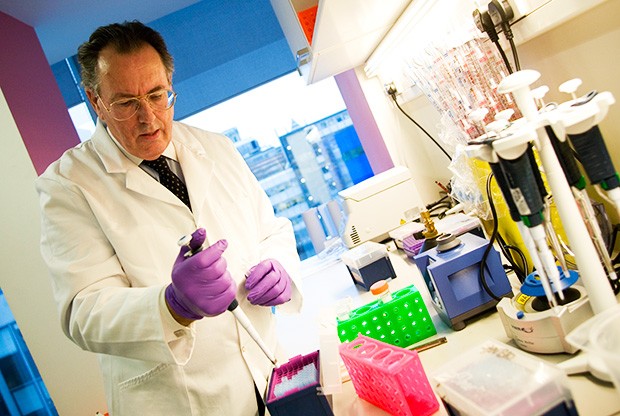 In the next decade or two, Richard Kitney predicts, synthetic biology will shed its "What’s that?" status and become part of everyday life.

He should know. Kitney, a professor of biomedical systems engineering at Imperial College London, is central to the United Kingdom's fast-tracked plan to deliver the discipline's benefits to society. As the keynote speaker at Concordia's recent UK-Canada Synthetic Biology Workshop, he explained how British academia, government and companies are working together to harvest scientific advances.

Biosensors developed with synthetic-biology techniques are opening new vistas in detecting and counteracting urinary tract infections, arterial plaque and liver cancer. Vincent Martin of Concordia's Centre for Applied Synthetic Biology is a leader, within the Canadian Cellulosic Biofuels Network, on engineering a yeast strain that can convert plant waste to biofuel.

No wonder the World Economic Forum designated synthetic biology, in 2012, as one of 10 "emerging technologies" that promise to change the world.

More evidence of the field's stature came last week, when Kitney cancelled his trip to Montreal — he addressed the Concordia workshop remotely — because he was summoned to a conflicting meeting with British Prime Minister David Cameron.

Kitney said in a Skype interview that the US, UK and China — in that order — are the world's synthetic biology leaders, but there is plenty of room for Canada.

"In many ways, Canada is pretty similar to the UK," he says. What that country has done to move from theory to practice "could largely translate to Canada."

In May 2009, Kitney and a few other British scientists laid out a strategy for "translation" of synthetic biology into everyday life. With energetic support from David Willetts, then-minister of state for Universities, Science and Cities, their work grew into a 35-page "roadmap" of principles to guide industrial and commercial development.

All involved saw the need for strong corporate participation; the roadmap led to a "leadership council" of scholars, government officials and corporate executives. The British government named Lionel Clarke, global strategic programme manager of the oil company Shell, to chair a Ministerial Leadership Council on the subject.

Today, British government funding has fuelled a consortium dispensing seed money. Currently, eight projects are at the proof-of-concept stage, and seven in the development phase.

From the earliest days of planning, Kitney says, everyone involved has foreseen some public resistance to synthetic biology, which some critics see as much more alarming than simple genetically modified organisms. That's why the roadmap emphasizes "responsible research," and why the funding consortium includes social scientists, as well as engineers and biologists.

Kitney is satisfied with the British development model. Canada has its own distinct structures and issues, but he remains optimistic.