4 decades of support for our fellow Montrealers 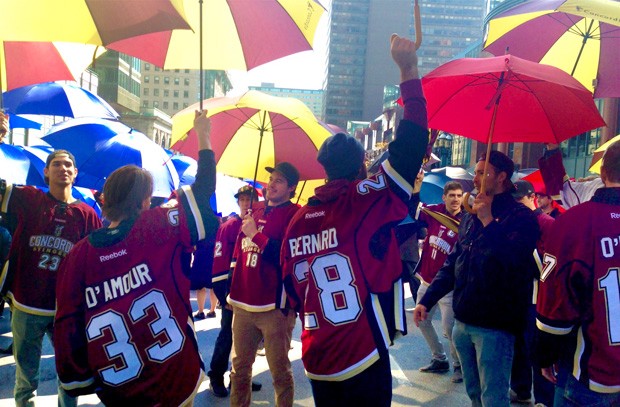 Centraide of Greater Montreal launched its annual fundraising campaign on October 2 with the annual March of 1,000 Umbrellas. Concordia’s men’s hockey team took part, as it does every year. | Photo by Concordia University

We were on board from the beginning.

On May 10, 1975, Centraide Montreal was born. A few months later, the umbrella organization, which replaced the Federated Appeal of Greater Montreal, launched its first annual fundraising campaign. Concordia — only one year old at the time — was a part of it.

That first autumn, the university raised $3,396 for Centraide. According to the Bank of Canada’s inflation calculator, that’s approximatley $14,470 in today’s dollars.

This year, during its fortieth campaign, Concordia hopes to hit $195,000, to match last year’s outstanding effort. Meanwhile, Centraide of Greater Montreal hopes to mark its own fortieth anniversary by raising $57 million.

For the fourth year running, Bram Freedman, vice-president of Development, External Relations and Secretary-General, is chair of Concordia’s Centraide Campaign. In his letter of appeal, Freedman points out that many of the 362 local organizations supported by the massive citywide fundraising campaign probably wouldn’t survive without it.

“That is why we continue to support Centraide year after year,” he states. “It is for the one in seven people in Montreal who use one or more of the agencies under the umbrella.”

Concordia’s Centraide Campaign has grown considerably since its humble beginnings in 1975. To mark 40 years of giving at the university, NOW takes a look back at some historic moments.

Concordia’s own campaign receives a major boost from the university’s rector, John O’Brien, who writes a letter encouraging everyone to give generously. They do, and the campaign raises almost $10,000, a more than 50 per cent improvement over the previous year.

Perhaps not surprisingly, O’Brien follows up with another letter a year later.

“While this is a difficult time for many people, it is especially so for those who must rely on the social services,” he writes. “It becomes all the more important then for those who can contribute to give as generously as possible.”

For the third year in a row, Concordians outdo themselves, surpassing the $13,000 goal set by O’Brien in his letter by more than $5,000.

This year sees the first dip in donations to Centraide at Concordia. Colin Waters, personnel administrator with Concordia’s Department of Human Resources and Centraide campaign manager, blames the downturn on tough economic times.

“People are feeling the squeeze all over, and this is one area they probably feel they can afford to cut down,” he tells The Thursday Report.

The following year sees another dip, and although donations begin to creep up again, little is mentioned about the campaign in university publications over the next few years.

“Concordia may be having financial problems, the stock market may be in a dizzy dive, but there are tens of thousands of Montrealers to whom these problems mean little,” states an editorial in The Thursday Report imploring Concordians to once again give generously to Centraide.

The campaign benefits from steady gains over the next decade or so, becoming a fixture on the calendars of many students, staff and faculty at Concordia.

After another downturn in 1997, the university community rallies to support Centraide once again, and the total raised tops out just above $50,000 for the first time in the campaign’s history.

It’s another banner year for the Centraide campaign at Concordia, which rings in the millennium by raising $65,014. The university receives the Centraide Prize for its performance in the category of organizations with 1,000 or more employees.

“The most heartwarming part of the campaign on campus was the initiative shown by individuals who organized fundraising events,” states The Thursday Report. “These included a windshield-washing blitz on both campuses, baking, pizza and craft sales, a loonie line, passing the hat at football games and a weekly raffle for donors.”

Concordia ups the ante one more time, raising $183,500 for Centraide.

In his first year leading the campaign, Freedman sets an ambitious target of $185,000, and once again the Concordia community answers the charitable call, and then some, donating a record $192,097.

There are many ways to contribute to the Centraide Campaign on campus.

For staff and faculty:

For a full schedule of events, visit the Concordia Centraide page.