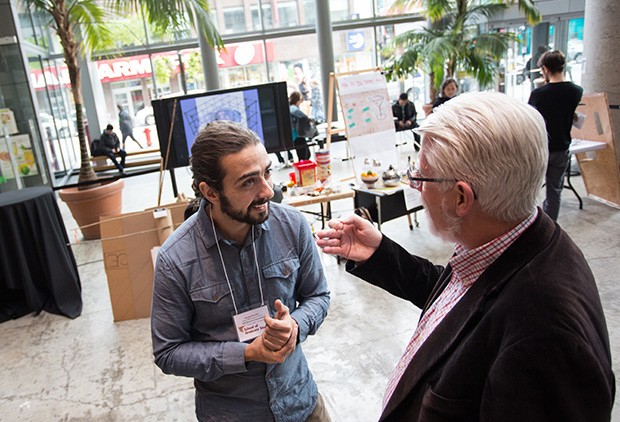 Some of Concordia’s most cutting-edge graduate researchers gathered in the EV atrium on September 17 to show off their work as part of the Individualized Program’s (INDI) inaugural research day. Their projects range from map making and its relationship with new media to the effects of dissonant music and exercise on stress in the human body.

It may seem as though these fields of study don’t really belong together, but that paradox is at the heart of INDI, a unique program that pushes interdisciplinary research to new heights by exploring areas of study not currently offered at Concordia or other universities.

“The INDI program is about flexibility in how knowledge is synthesized and created,” says director Ketra Schmitt. “For this to work, we limit the number of those we admit to exceptionally capable and prepared students.”

Here is an overview of some of the event’s award winning researchers and their projects.

Morgan Rauscher’s research focus came out of a preoccupation with how technologies such as 3D printing are reducing important physical interactions between artisans and their materials. His work seeks to bridge this gap by using robotics to create what is known as haptic transference, a technology that mimics the physicality of using a machine through tactile feedback.

As part of his process, Rauscher created a robot out of recycled bicycles that could cut wood with a chainsaw. He then allowed five and six-year-olds to control the robot while they received physical sensations of what it was like to use the saw through a special tactic controller.

Rudy Zhou’s research centres on the effects of physical and sexual abuse on the oxytocin gene (referred to as the pro-social hormone, as it promotes relationship bonding). Though the study is still in its initial phases, its findings could shed light on the question of whether negative life events alter our DNA.

After completing an undergraduate degree in biochemistry at McGill University, Zhou came to INDI because he didn’t want to be confined to one field. The program allows him to dovetail psychology, biochemistry and pharmacology.

Martorell was a fitting winner of the People’s Choice award given that his work is all about collaboration. A self-described “commoner” Hugo examines how the participation within collective action, ethical economics and open governance relate to where food comes from, how it is transported and the methods with which it is prepared.

Blending anthropology, sociology, applied human sciences, and community and public affairs, his work involves multiple stakeholders and community groups — from farmers to youth and low-income advocacy groups. One of the factors that propelled his research was his involvement in the founding of Justice Alimentaire Montréal, a collaborative hub that connects people and organizations that want to move away from the current agro-industrial food system and build more resilient and equitable alternatives. 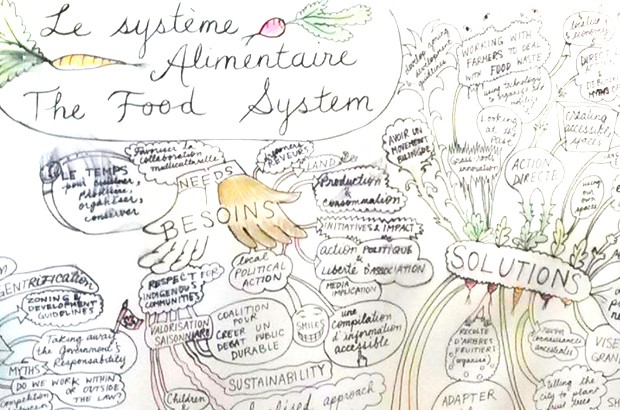 A portion of a “mega mind-map”, a collective endeavour with artist Justin Karas, created during a session Martorell facilitated at the JAM Food Justice Convergence in October of 2013. | Courtesy of Hugo Martorell