Frosh 2014 and orientation: a packed calendar of safe and fun events 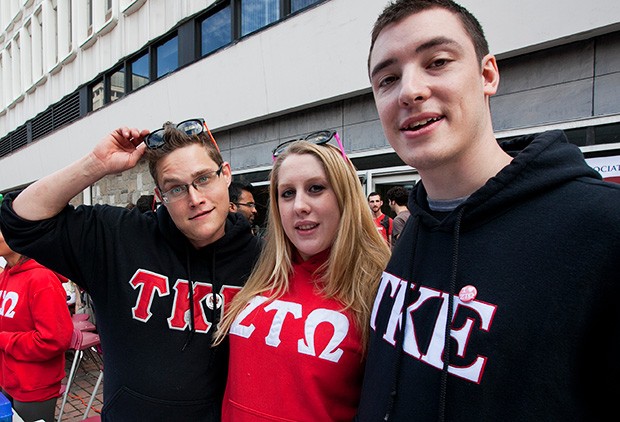 This year, all frosh and orientation student leaders, staff and volunteers at Concordia will take part in a first-ever three-hour training program. | Photo by Concordia University

Concordia’s Dean of Student’s Office, the Concordia Student Union (CSU) and the university’s various student associations have been working together to make the 2014 frosh and student-led orientation activities more engaging, more inclusive and safer than ever.

“We’re playing a role in helping them increase the participation of their members in their activities, and one of the ways to do this is to build the capacity of leaders, staff and volunteers to be able to prevent problems and feel empowered to deal with them should they arise,” says Andrew Woodall, dean of students.

With support from Concordia’s Student Services, including the Sexual Assault Resource Centre, Health Services and Counselling and Development, Security Services and the Centre for Gender Advocacy, the Dean of Student’s Office is assisting the student associations in delivering a mandatory, first-ever training program focused on harm reduction for frosh and orientation student leaders, staff and volunteers.

The training will cover topics like first aid, alcohol management and sexual consent. “It will help them figure out how to create a space which feels safe and comfortable for all students,” says Woodall. “And, when something happens, how to deal with it in the best possible way. It’s not an enforcement approach; it’s really a partnership approach.”

Student associations are onboard

Michael Richardson, president of the Commerce and Administrative Students’ Association (CASA JMSB), is delighted with the initiative. “If our leaders are trained properly, that should trickle down to all the froshees,” he says, adding that his association and others will provide complementary workshops on how to be a great frosh leader. “It’s still an event where you’re responsible for your team, and where you show them a good time, while still being safe and responsible.”

While Richardson and his fellow executives will be hosting CASA JMSB’s usual mix of frosh parties and a gala mixer, he says they have expanded their range of frosh offerings to include a speakers’ series, in a bid to attract more students.

“We have around 1,300 new students, and only 600 people come to these parties. So there are another 700 people who don’t. We saw that as an opportunity to touch an untapped market,” he says.

Focus on community and engagement

The theme of the CSU Orientation, which runs from Tuesday, September 2, to Friday, September 12, is “Getting to Know Your Community.” Two of the main events, the Clubs Street Fair (September 3) and the Rethink Sustainability Fest (September 4) will take place on Mackay Street, which will be closed to traffic.

Charles Bourassa, the CSU’s VP student life, says the idea was to create activities that would attract both new and returning students, and encourage them to get involved in the life of the university.

“I think a lot of students miss out on the opportunity to take part in frosh or orientation during their first year, so that’s why we’ve targeted certain locations — to create visibility.”

The support from the Dean of Student’s Office in organizing the CSU’s orientation events has been instrumental, Bourassa says. “They have really been there to provide us with information and be as helpful as possible.”

Looking back on his own first few weeks at Concordia, Bourassa recalls how the frosh events he took part in, organized by the Arts and Science Federation of Associations (ASFA), helped him make a lot of new friends, and inspired him to become more involved in student life at the university.

“I was a frosh leader for two years in a row, and then I came and started working at the CSU. I want to take what I got from those experiences, which were pretty positive, and bring it here.”

As Woodall points out, Bourassa’s story illustrates why both the university and the student associations want to encourage as many students as possible to participate in frosh and orientation activities.

“You’re building your peer network, you’re getting to know the students who lead the university, and you’re having fun. And, I think their participation is directly linked to their engaging as students in the greater life of the university, their retention and their ultimate success.”