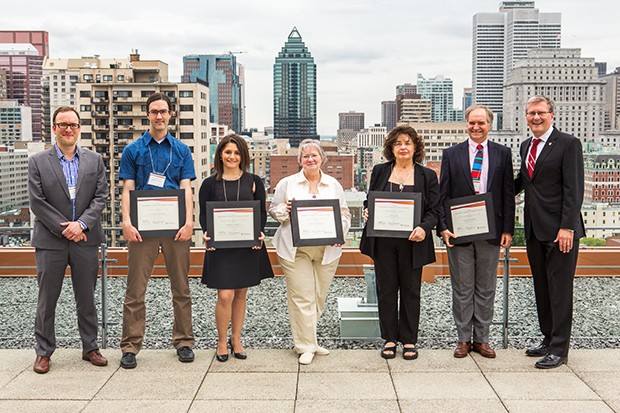 On June 6, more than 50 faculty, staff and students gathered to celebrate the winners of this year’s President’s Media Outreach Awards.

Established in 2013, the awards recognize members of the Concordia community who represent the university in the media by lending their voices to stories, taking part in media interviews or publishing opinion pieces on their areas of expertise.

As a direct result of these contributions, articles about Concordia’s research and commentary from its experts now account for almost 90 per cent of the international media coverage received by the university.

The President’s Media Outreach Awards honour the individuals whose stories drew the most substantial coverage in media outlets across Canada or internationally that year. The  five 2014 winners were:

While the event celebrated Concordia’s leading newsmakers, the university counts among its ranks hundreds of ambassadors who understand the value of sharing its achievements with the media and do so each day. Every Friday, a Newsmaker of the Week is identified based on the media coverage generated in the preceding seven days.

Their efforts are not lost on Alan Shepard, Concordia’s president. At the ceremony, he expressed his gratitude to those who go beyond the demands of teaching and research to give their time to journalists.

Shepard emphasized the role of media engagement in giving the general public a sense of the valuable expertise that exists at Concordia and an appreciation of the range of exciting projects it houses.

In a video screened at the event, they reflected on the value of their work with journalists.

From global warming to Mars: winners of the 2014 President’s Media Outreach Awards

Damon Matthews, an associate professor in the Department of Geography, Planning and Environment, received the award for Research Communicator of the Year (International) for his work in identifying the world’s greatest contributors to climate change.

Matthews’s research was covered in a range of scientific and general-interest publications, including New Scientist, The Atlantic Cities (now known as CityLab), The Times and CleanBiz Asia. Many were from the locations named as “top offenders” for global warming in Europe, Asia, Africa and Australia. Matthews also participated in a talk on climate change organized in partnership with The Walrus magazine this spring in Ottawa.

The award for Research Communicator of the Year (Canada) went to William Bukowski, a professor in the Department of Psychology and the director of the Centre for Reseach in Human Development.

Bukowski and doctoral candidate Kate Drury explored education in all-girls’ schools to determine which girls would thrive in a single-sex learning environment. Their findings made the front page of the National Post and were featured in dozens of media outlets across North America and as far away as India.

Sabrina Chiarella, a doctoral candidate in psychology, received the award for Graduate Research Communicator of the Year for her work establishing that infants are able to recognize whether adults express emotions appropriate to an experience.

Chiarella’s research was covered in publications including Psychology Today, The Telegraph and the Mail Online. It was also the subject of a question put to contestants on l’Eredità, a popular television game show in Italy. A video illustrating Chiarella’s findings was viewed by more than 28,000 people on YouTube, and was posted on the website of the daily newspaper La Presse.

Raye Kass, a professor in the Department of Applied Human Sciences, received the Expert Commentator of the Year award. Kass did countless media interviews on the selection criteria for participants in the Mars One project — an initiative that aims to establish a human colony on Mars by 2025.

Kass clarified what the project’s organizers would be looking for in candidates for the one-way trip to the Red Planet during appearances on CBC Radio’s The Current and CBC Television’s Lang and O’Leary Exchange. She was also the featured expert in stories by The Canadian Press and The Globe and Mail, and an opinion piece she wrote on the subject of space voyages was published in The Gazette.

The award for Communications Ambassador of the Year recognizes media work by non-academic members of the community. This year’s winner was Estelle Bouthillier, an information and documentation analyst in the Office of the President and Vice-Chancellor.

Bouthillier shared her expertise on the British royal family on the occasion of the birth of Prince George, son of the Duke and Duchess of Cambridge — or Will and Kate, as they are more commonly known — with Quebec outlets including TVA, Radio-Canada and La Presse.

She was also sought out by France 24, a leading French news channel, and was quoted by Yahoo! Actualités.

Read about the latest Newsmakers of the Week at Concordia.