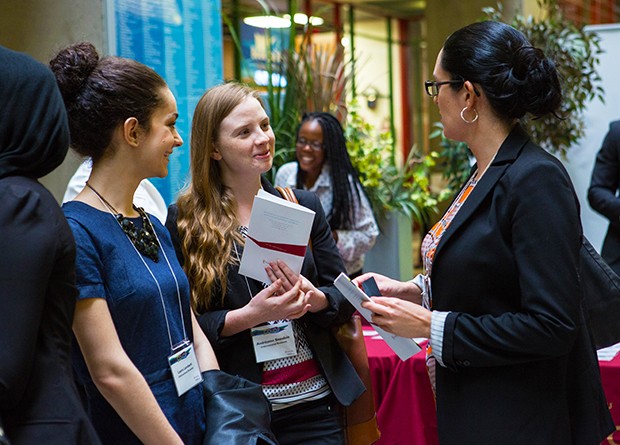 Students network with attendees at this year's Co-op Awards of Recognition. | Photos by Concordia University

Concordia’s Institute for Co-operative Education (Co-op) recognized the contributions and achievements of its participants at the 2014 Co-op Awards of Recognition Event (CARE) and Student Showcase last week.

“This is our annual celebration of all the partners in our Co-op success stories,” said Gerry Hughes, the institute’s director. “The event is our opportunity to reflect back over the year, and thank all the individuals who collaborate with us — our employers, our students and our staff.”

In all, Concordia Co-op students were awarded nearly $10,000 at the May 22 ceremony; many employers were thanked as well.

The institute offers experiential learning opportunities in 35 undergraduate and four graduate programs — which, as of this year, include anthropology, sociology, journalism and political science.

As engineering student Antonin Picou explained, Co-op provides participants with an invaluable career advantage. "It’s been a great learning opportunity,” he said. “You get experience in the workplace that other students don't get."

Founded in 1980, Co-op now serves 1,500 enrolled students and collaborates with hundreds of employers. The awards ceremony on May 22 was the 11th annual event of its kind.

At the start of the evening, 28 Co-op students from departments including finance, biochemistry, translation and mechanical engineering showcased their accomplishments in the atrium of the J.W. McConnell Library (LB) Building.

They presented posters illustrating their experiential growth, and the benefits of their work with employers including Deloitte, Bombardier, the Canadian Space Agency, the McCord Museum and the Orchestre Symphonique de Montréal. The students also handed out business cards and networked with attendees.

The awards ceremony began with Hughes asking the students to stand up for their “moment in the sun.”

“This is what it’s really all about,” he said.

“One consistent theme that applies to our students as they cross the stage at convocation is they have enhanced their level of self-awareness and overall confidence for their future career direction,” he said.

Twenty-two awards — including Employer’s Choice, Student’s Choice, Co-op Staff’s Choice and Alexandre Quintal Co-op Student of the Year — were handed out. Four of the trophies were created by students in the Department of Design and Computation Arts, and featured designs that represented the individual honours.

Catherine Bolton, vice-provost of Teaching and Learning, expressed pride in the accomplishments highlighted by the event.

“At the end of the day, our success depends on our students and their ability to make that transition between the classroom and the workplace, and on our Co-op employers, who are willing to mentor, supervise and train our students.”

One of those employers is Patrick Bonneau, an associate in the tax division of Deloitte. Bonneau said he’s been working with the Co-op program since 2007, and that he has been consistently impressed by the Concordians he’s seen at the firm.

“They’re motivated, dedicated, very professional and interested in the work we do. The program is important to us.”

The ceremony concluded with Picou, who won the Alexandre Quintal Co-op Student of the Year Award. 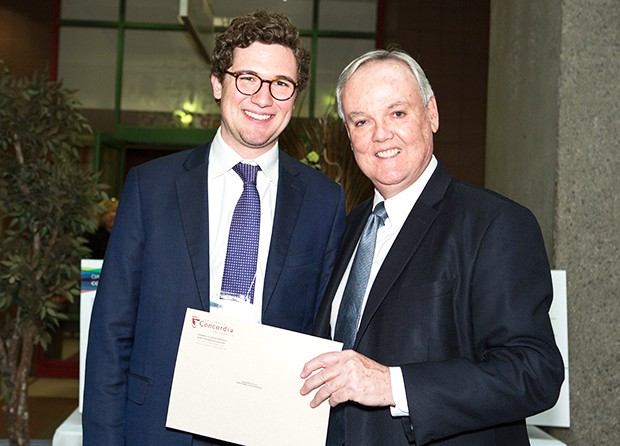 Picou — who served as president of the Engineering and Computer Science Association — completed two consecutive work terms at Deloitte, and is now finishing his final work term at Bombardier. These experiences, he noted, offered a glimpse of different sides of engineering, and are guiding him towards his desired career path.

The Concordia student believes Co-op had a similar impact on the other honourees.

“The Co-op journey has definitely been a challenge, and we have gained so much from it along the way, both on the professional and personal levels,” Picou said.

“We have formed lifelong relationships and fruitful business partnerships; we’ve learned the meaning of hard work. We’ve learned about our strengths, our flaws and our passions — lessons that will help us pave our future careers.”

Winners at the 2014 Co-op Awards of Recognition Event