FIFA-certified turf, nets and goalposts are coming to the Concordia Stadium and De Maisonneuve Field
|
By Lucas Wisenthal 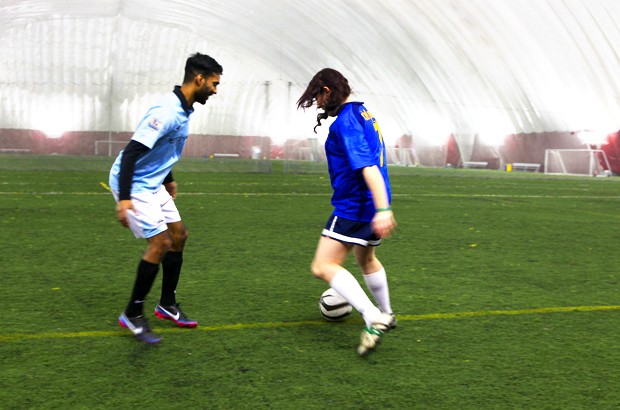 The new artificial turf is designed to minimize injuries, including concussions. | Photo by Concordia University

Concordia’s athletic fields are getting a facelift.

This spring, the De Maisonneuve field (also home to the Stinger Dome) on the Loyola Campus, will be outfitted with state-of-the-art turf, nets and goalposts. And next year, the field at Concordia Stadium is getting the same treatment.

For the past three months, Fisher and his team have been getting set to start the first field’s makeover. Though most of the infrastructure beneath the surface — which was last replaced 10 years ago — is sound, there’s still work to be done before it can be carpeted with the FIFA 1 Star-grade turf that will cover it.

“Once we get the old turf off, we have to regrade all of the field itself,” Fisher says.

That means ensuring that the subtle inclines beneath the field — imperceptible 0.05-degree slopes — are exactly as they should be. “You won’t even notice them, but they help with drainage,” Fisher says. They also ensure that balls roll properly.

The new synthetic turf, meanwhile, will be more forgiving than the surface that preceded it. The idea was to minimize injuries, including concussions. With that in mind, the material will have less resistance, which will diminish the impact of the falls that take place in sports like football, soccer and rugby.

An independent laboratory will certify that the new playing surface conforms to FIFA 1 Star standards. But it’s not just turf that’s being upgraded. Both the soccer nets and football goalposts will also be replaced with models that meet current standards.

The new nets and goalposts will be simple to swap, making it easier for the fields to be used for a variety of sports. The fields’ lines — which differ from game to game — will also be more practical to change.

“Before, we had to cut and insert lines,” Fisher says. “Now, they’re put directly on the turf during manufacturing, so it’s that much safer, and less problematic.”

The overhaul of the fields comes on the heels of the NHL-caliber upgrades to the Loyola Campus’ Ed Meagher Arena, which last November reopened with a state-of-the-art, environmentally friendly refrigeration system, new windows, improved insulation and more. Like the arena, the fields are expected to help Concordia draw top-tier athletes.

Check out how one Concordia student made his own hockey rink on the Loyola Campus this past winter.