The No. 1 thing Concordians want from the university’s libraries

The latest LibQual survey results are in
|
By James Roach 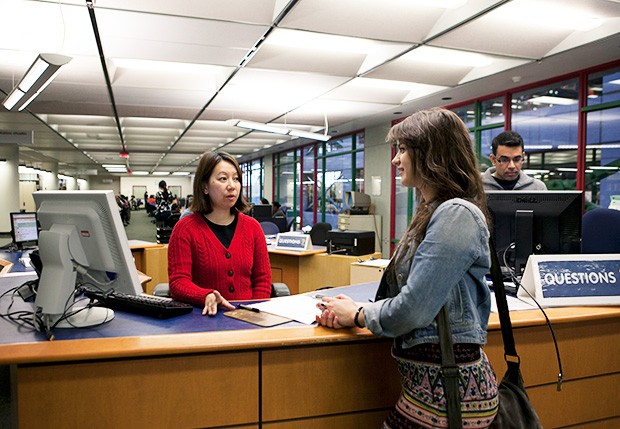 Reference assistants like Boi May Ang answer more than 100 questions from students each day.

While students and faculty appreciate the librarians and support staff, there’s still work to be done to improve library spaces and access to information at the university.

More than 4,000 undergraduates, graduate students, faculty and staff responded to LibQual 2013, a university-wide survey on perceptions and expectations of the quality of library service at Concordia.

When it came to spaces, comments from undergraduate and graduate students addressed concerns like a lack of study spots, including group study rooms. Other feedback noted that the libraries look drab.

Guylaine Beaudry, interim university librarian, is aware of the issues.

“When the Webster Library first opened its doors in 1992, we had 16,000 students,” she says. “Today, our student enrolment numbers have almost tripled, yet our library spaces are the same. Overcrowding and noise are an everyday reality, especially around exam time.”

Over the course of the Webster Library’s existence, demands on university libraries have shifted as well.

“In those 22 years, we’ve also seen new needs that academic libraries have to meet, from spaces exclusively designed for individual, silent study to those that facilitate teamwork.”

The planned Webster Library transformation — which is set to include a redesign of the facility’s interior — will see overall library space increase by 27 per cent and the number of study seats increase by 114 per cent, from 1,150 to 3,400.

Graduate students and faculty who responded to the survey indicated that they have difficulty locating journals. Some feel that they lack access to key publications, while others would like the libraries to order more printed books.

It’s in the works, as Beaudry explains.

“In the coming months, we will launch consultations with faculty and students on how to reconfigure the libraries’ collections and further improve information access,” she says. “The libraries will see the continued growth in their digital collections, and we have recently received additional funding for the purchase of books.”

LibQual is a survey that measures the quality of library facilities, collections and services. It has been completed by students and faculty members at several universities around the world.

While the LibQual 2013 survey does not necessarily reflect the views of all Concordians, it does reflect those of the 10 per cent who responded.

As part of LibQual 2013, 1,697 respondents submitted questions and comments. The libraries developed a “You spoke, we listened” page to provide responses.

The LibQual 2013 survey was conducted ahead of plans to transform the Webster Library into a 21st-century learning environment.

Read the LibQual 2013 report, and send us your comments on Concordia’s libraries.