Supermileage project triumphs at the Society of Automotive Engineers World Congress and Exhibition
|
By Laurence Miall
Source: Faculty of Engineering and Computer Science 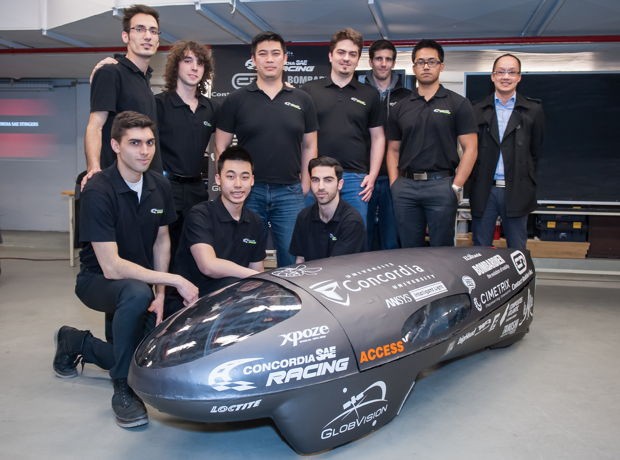 The Society of Automotive Engineers (SAE) World Congress and Exhibition in Detroit, Michigan is one of the biggest car industry events of the year.

It was on this international stage that, on April 8, Concordia’s student chapter of the SAE and its Supermileage car clinched first place in the prestigious Student Exhibit Competition.

Concordia’s team finished ahead of 10 others, including groups from Puerto Rico, the United States and, closer to home, the École Polytechnique de Montréal. The competition’s judges included industry experts from companies like General Motors, Ford, Chrysler and NASCAR.

The team had 10 minutes — including a question-and-answer session — to make a winning impression.

As Norvan Gharabegi, a fourth-year mechanical engineering student, explains, this was no easy feat. “SAE has created many technical standards used in the industry today, and we had to show how we’ve incorporated these into our project.”

The project under scrutiny was the students’ Supermileage car, a vehicle designed to travel long distances using as little fuel as possible.

Concordia students have built and raced several Supermileage cars since 1986, when the team was founded, and this year’s model may be the best yet. Its shell and chassis weigh in at only 28 pounds, and it’s made from the same grade of carbon fiber materials that you would find in a Learjet.

Of course, a victory this big doesn’t come without a lot of help. While only five SAE team members travelled to Detroit, numerous others worked very long hours on the project. Even a graduate — Raymond Lafrance, BEng 83, general manager at Montreal’s Contact Rubber — played a major part in the win.

“He’s been going out of his way to help us this year,” Leclerc says. “He’s like an honourary team member.

The victory for SAE represents not just what Leclerc calls a “vote of confidence” in the team’s car; it’s also an academic achievement, since the team members that focused on the manufacturing process used this experience for their Capstone — the final-year project that all undergraduates studying in Concordia’s Faculty of Engineering and Computer Science must complete in order to graduate. The vehicle was also recognized with a Department of Mechanical and Industrial Engineering Design Award.

What’s next for the students? In June, the Supermileage team will compete in Marshall, Mich. Meanwhile, a very different team — Formula Racing — will take part in a competition in Brooklyn, Mich.

“The 2014 racing season is already off to a great start,” Leclerc says.