Running on ice, snow … and Mars 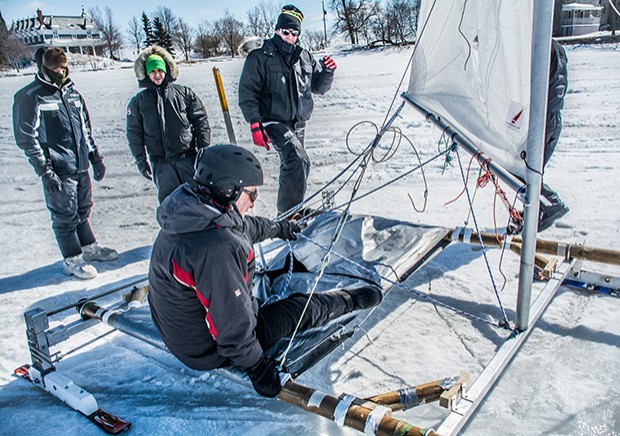 Readying the Dragonfly for action in mid-March. | All photos by Concordia University

On a cold day in mid-March, a team of Concordia students set out for Montreal’s West Island, where they tested a creation they call the Dragonfly on a frozen lake. This marked the seventh and final test of their invention — a catamaran-like vehicle built to travel on any kind of winter terrain, from fresh, fluffy snow to smooth ice. It reached speeds of 30 kilometres per hour.

The Dragonfly is among the Capstone projects created by teams of undergraduates studying in the faculty of Engineering and Computer Science. Students must each complete a Capstone to graduate. And though the projects are no small feat, this year’s collection is breaking new ground with daring innovation and engineering ingenuity.

The Dragonfly — what its inventors call an ice runner — is actually the brainchild of two Capstone teams collaborating under the direction of Concordia alumnus Xavier-Henri Hervé, a co-founder of air flight simulation company Mechtronix and a current co-director of the university’s District 3 Centre for Innovation and Entrepreneurship. One team was responsible for the vehicle’s chassis, the other for its steering.

“We’ve tested it on a full spectrum of conditions,” says Michael Ciccone, a member of the chassis team. 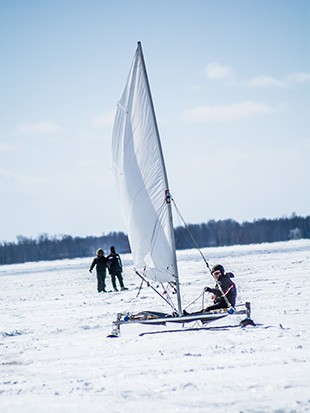 The session on the lake left Ciccone fully satisfied with the ice runner’s resilience.

“After seven tests, there have been no major failures,” says Sami Chidiac, another student who worked on the chassis.

The Dragonfly boasts a unique modular design, allowing for different kinds of skis, snowboards or blades to be arranged in configurations according to the terrain they’re taking on. The skis can be turned by the driver, and can also tilt as they run over bumpy terrain.

The success of the 2014 ice runner is a result of learning from an iteration of a project undertaken last year. This year’s model is lighter. It’s built primarily of bamboo, and its sail is supported by steel cords, making the whole thing more flexible.

It meets the goals Hervé set for it, weighing in under the 65 kilograms he had stipulated, and travels comfortably in the desired speed range of 15 to 20 knots.

Hervé was impressed with several innovations on the vehicle, including the use of bamboo poles in the main structure — an idea inspired by snowmobiles’ ski mountings — and numerous other features.

A vehicle built for Mars

While the ice runner rises to the challenge of the harsh Canadian winter, the students of Space Concordia set a very different goal for themselves: building a vehicle for the craggy landscape of Mars.

Of course, a trip to Mars is not in this year’s agenda — but a trip to Hanksville, Utah, is. There, from May 29 to 31, the students will test their mettle against high-calibre international competition in the University Rover Challenge. 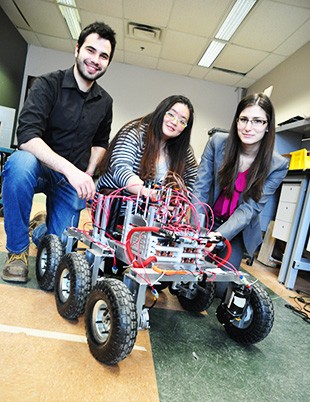 The students’ creation is the result of three sub-teams working together since June 2013. While one team focuses on the rover’s mechanical components, another is responsible for its electrical and computer engineering. A third team handles software development.

The prototype has already been tested and evaluated by faculty members. Further work will now ready it for competition.

The team behind the rover has already had to overcome many obstacles, right up to last week’s testing.

“Before our tests, last minute, our wireless receiver didn’t work,” says Stephanie Lambrinakos-Raymond, one of the mechanical engineers.

The students reacted swiftly, opting instead to connect an Xbox controller to SCAAR with wiring.

The rover weighs in at approximately 50 kilograms, and is powered by over seven kilograms of rechargeable batteries.

“We made SCAAR as robust and powerful as possible,” says mechanical team lead Ivan Ivanov.

In Utah, it will compete in four categories.

In the first, “terrain universal” — for which the vehicle was designed, in order to fulfill Concordia’s academic requirements — its six wheels will have to successfully travel over sand, boulders, trenches and rocks. The second category, “astronaut assistance tasks,” will challenge the rover to locate and deliver tools by following Global Positioning System coordinates, and to deploy what’s called a wireless repeater box, which amplifies signals sent out by a transmitter.

The third event, “soil sample retrieval,” involves not only scooping up subsurface soil but also testing it for signs of life. And in the final category, “equipment servicing task,” the rover will have to perform highly dexterous and nimble manoeuvres using its on-board robotic arm. These tasks will include manipulating plumbing-related equipment such as hoses, pipes and valves, as well as pushing buttons and following instructions in a set order.

The team is hoping for a strong showing across the board.

“When it comes to the competition, we don’t have any previous history,” says Ivanov. “We’re there to do our best.”