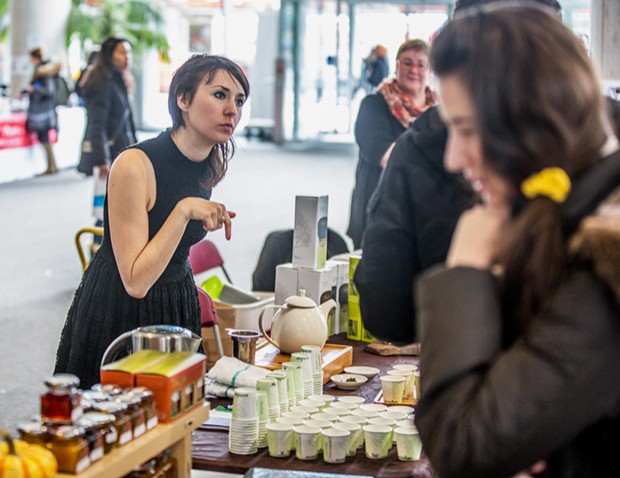 Few things can provide a sense of a region’s culture like food and film. So it only follows that both will be front and centre during the second edition of La Francofête à Concordia : laissez-vous tenter, the university’s celebration of all things Quebec.

The event — which takes place from March 17 to 21 — will spotlight Quebec’s vibrant French culture. At the same time, it will introduce Concordians who may be new to the province to all it has to offer.

“The Francofête is the perfect way for the Concordia community to come together and celebrate,” says Philippe Caignon, chair of the university’s Département d’études françaises. The department, together with the Oui Can Help! program, is hosting the fest.

With that in mind, on March 19 and 20, the atrium of the Engineering, Computer Science and Visual Arts Integrated Complex (EV Building) will host the Foire du terroir québécois, a food market that will draw as many as 25 provincial producers each day. On offer will be regional specialties like maple syrup, caramel, apple cider and chocolate.

The fair already proved a hit last year. According to Département d’études françaises administrator Maria Trigueiro, the vendors who took part in the event found overwhelming interest in their products among Concordia’s international students.

“When students who are new to the province come to the fair, they discover different tastes and flavours that are linked with Quebec culture,” she says.

In addition to many products they can bring home, visitors will find another perennial Quebec favourite: maple taffy, served from a mobile sugar shack.

But Francofête is hardly only about eating. On March 18, the festival will welcome Hejer Charf, a Tunisian-born, Montreal-based filmmaker.

Françoise Naudillon, an associate professor in the Département d’études françaises, met Charf in 2003. Since then, her appreciation for Charf’s films has grown.

In the morning, Charf’s critically acclaimed Les Passeurs, a 2003 feature set in Montreal, will be screened at the J.A. DeSève Cinema. The audience will also have a chance to see a 10-minute teaser of Autour de Maïr Verthuy, Charf’s forthcoming documentary about the first principal of Concordia’s Simone de Beauvoir Institute.

In the afternoon, a series of the director’s shorts will be shown upstairs, in the Département d’études françaises. Following both screenings, Charf will take questions and comments from the audience.

The idea behind this part of the event is to showcase the province’s flourishing film scene.

“Charf’s cinema is an art cinema,” says Naudillon. “I hope the audience will appreciate her passion for directing film.”

More than that, though, she would like attendees to walk away with a sense of the richness and scope of the province’s culture.