Now is the time to support the Stingers 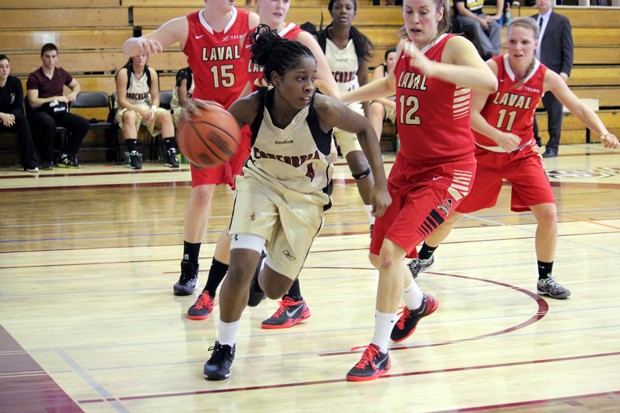 Can’t make it to Sochi for the Winter Olympics? No biggie — there’s plenty of exciting, high-level sports action happening right here at Concordia over the next few weeks, courtesy of the Stingers varsity men’s and women’s basketball and hockey teams.

With less than a month left in the regular season, Concordia’s athletes are fighting hard to stay in playoff contention, and they’re building serious momentum.

Sitting in first place in the province and sixth place in the country, with seven wins and three losses so far in league play, the Concordia Stingers’ women’s basketball team is looking very strong heading into the regular season’s final stretch.

The Stingers’ 49-47 win over the McGill University Martlets on January 25 was their fourth in a row. Veteran guard Kaylah Barrett scored a game-high 18 points, including two crucial free throws in the last minute of play to put her team on top.

“I had to make one basket to put us up by one, but there was still about 13 seconds on the clock,” she says. “Two is more comfortable!”

Barrett, who leads the provincial conference in scoring with 132 points in 10 games, is confident about her team’s playoff prospects.

“As a team, the girls are playing really well. We lost a few games in the beginning, and then we won our Christmas tournament again, and since then we’ve been winning most of our games.”

Catch the Stingers in action against the fifth-place Bishop’s University Gaiters on Saturday, February 8, at 2 p.m. at the Loyola Gymnasium (7200 Sherbrooke St. W.) on the Loyola Campus.

“You could see we were a little more fatigued than they were,” says forward Mukiya Post. “We let them push us out of our game.”

The Stingers will try to bounce back into winning form against Post’s former team at Bishop’s University in Lennoxville, Quebec, on Friday, February 7. The Victoria, B.C., native, who transferred to Concordia from Bishop’s for his fourth year of eligibility, says he hopes to make a triumphant return to the gym where he played three seasons as a Gaiter. 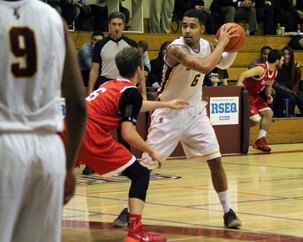 Fourth-year transfer Mukiya Post will face his former teammates from Bishop’s University in a home game on the Loyola Campus on February 8.

“It should be interesting. I definitely have a lot of faith in our team. We’ve come a long way since we played them last.”

The Stingers are currently sitting in third place in the the Réseau du sport étudiant du Québec (RSEQ) provincial standings, behind Bishop’s and McGill. Post is certain they’ll make it into the playoffs, though the squad is still trying to realize its full potential, he says.

“I know we haven’t reached our peak yet. We’re still climbing and climbing towards that stage. I think it’s good timing, because it’s going to be around the same time as the playoffs happen that we’re going to peak.”

Catch the men’s basketball team in action against the first-place Bishop’s University Gaiters on Saturday, February 8, at 4 p.m. at the Loyola Gymnasium (7200 Sherbrooke St. W.) on the Loyola Campus. 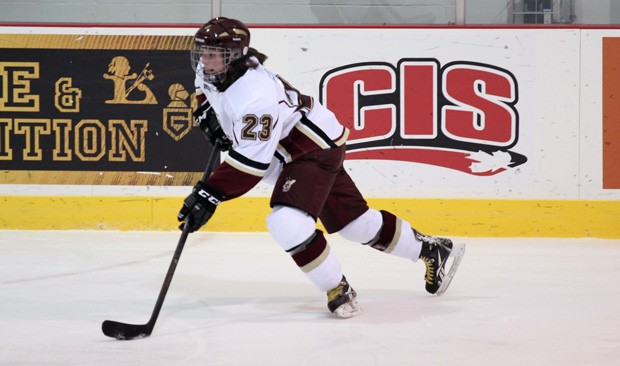 Currently sitting in fourth place out of the five teams in their conference, Concordia’s women’s hockey team has struggled to put wins on the board this season.

First-year defender Marie-Joelle Allard attributes the Stingers’ record to a lack of pucks in the net (the team has scored only 30 times in 17 games). “We need to score more goals,” she says.

The Stingers broke their scoring drought and a three-game losing streak on February 2 with a 3-1 win over the Carleton University Ravens. Going into the game, Concordia had only two goals in three starts.

On Saturday, February 8, the Stingers will attempt to improve their 5-12 win-loss record when they head to the nation’s capital to face the slumping University of Ottawa Gee-Gees, who have lost their last six league games in a row. Concordia won 4-2 the last time the two teams faced off.

Catch the Stingers in action against the first-place McGill University Martlets on Sunday, February 9, at 3 p.m. at the Ed Meagher Arena (7200 Sherbrooke St. W.) on the Loyola Campus. If you can’t make it to the game, watch the webcast on Stingers.ca. 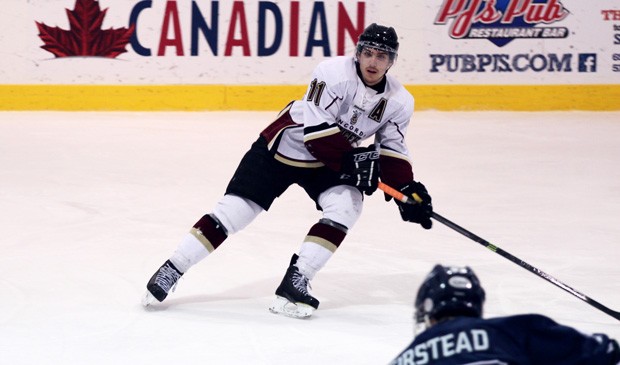 The Concordia men’s hockey team got off to a shaky start this season, posting only two wins in its first 10 league games. Since the holiday break, things have improved slightly, with the team racking up four wins and five losses.

The Stingers have shown they can perform under pressure. Their January 24 game against Nipissing University was a nail-biter. Trailing by one with under five minutes left, Ben Dubois managed to find the back of the net, forcing a shootout. The Stingers won the goal-scoring duel with solid goaltending from Antonio Mastropietro and markers from new recruit Hugo Vincent and team captain George Lovatsis.

Most recently, Concordia suffered two tough losses in a row (6-2 against the Université du Québec à Trois-Rivières on January 29 and 7-2 against Carleton on February 2). In spite of this, second-year centre Olivier Hinse, who leads the Stingers with 29 points, is confident the team will be able make it into the provincial playoffs.

“I think that we may have a bit less skill than last year, but we’re hard workers. Everybody’s on the same page, and we work together.”

Catch the Stingers in action against the University of Ontario Institute of Technology Ridgebacks on Saturday, February 8, at 2 p.m. at the Ed Meagher Arena (7200 Sherbrooke St. W.) on the Loyola Campus. If you can’t make it to the game, watch the webcast on Stingers.ca.