Why the future of synthetic biology will be interdisciplinary

Biologist-turned-artist Britt Wray, keynote speaker at a Concordia round table, explains the potential and the pitfalls
|
By Christian Durand 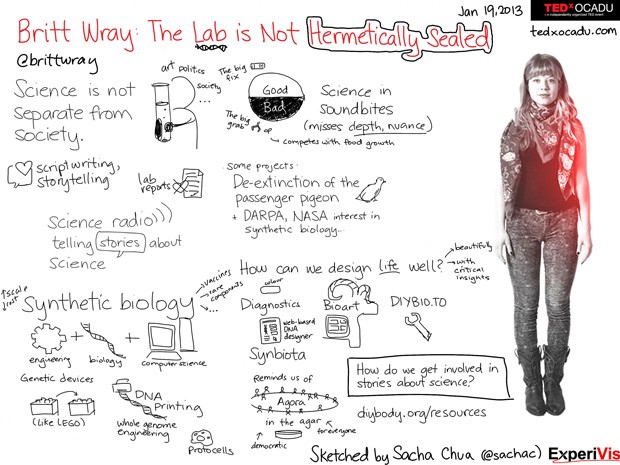 From helping produce more energy-efficient biofuels to increasing global access to life-saving medications, the emerging field of synthetic biology has the potential to provide solutions for many of humanity’s problems.

At Concordia, the Centre for Applied Synthetic Biology (CASB) — Canada’s first dedicated research centre — is leading the way. It brings biologists, engineers, computer scientists and social scientists together to develop tools and technologies with practical applications in environmental and health management.

On November 26, the university held a round table to explore new interdisciplinary approaches to the research and teaching of this vast and ethically complex discipline. “Synthetic Biology: Interdisciplinary Perspectives” was hosted by the Individualized Program at the School of Graduate Studies. Academics from all four faculties — Arts and Science, Fine Arts, Engineering and Computer Science, and the John Molson School of Business — attended, including CASB co-directors Vincent Martin, the Canada Research Chair in Microbial Genomics, and Nawwaf Kharma, an associate professor  in Electrical and Computer Engineering.

The event’s keynote speaker was Brittany Wray, a filmmaker, radio documentary producer and self-described “biologist-turned-artist” who has been researching synthetic biology for three years. She completed Concordia’s graduate diploma in Communication Studies in 2010.

In an interview before Tuesday’s round table, Wray explained the basics.

What exactly is synthetic biology?

Brittany Wray: Synthetic biology is the field of science where an engineering mindset gets applied to biology in an attempt to build things out of nature from an intentional design perspective.

It is always a tricky discipline to define because it takes many forms, from work that aims to make genetic devices that modify an organism in a specific way, to whole genome engineering where the entire genetic information in an organism is organized by a scientist from the bottom up.

What are some practical examples?

BW: Synthetic biology is being developed largely for biofuels and medicine. For example, a company has recently made a synthetic yeast that creates biofuel as a product of its metabolism. Another recent development has been the invention of the cheapest anti-malarial drug to hit the medical world.

Synthetic biology can also be used to create synthetic versions of some coveted food ingredients, like vanilla or saffron. The applications are far ranging — from biosensors, to cell communication and protein transfer devices, to strategies for interspecies communication.

What impact can this emerging field have on society?

BW: Synthetic biology is often propped up as the big fix to some of the big problems we face around sustainability, and the deep environmental trenches we've gotten ourselves into after many decades of industrialized life. It garners a lot of excitement because of its potential to produce fuel in far more sustainable ways. But the question remains, of course, can it do so on such a large scale?

It also has the potential to help us see health problems before it is too late. A synthetic biosensor could test for meat spoilage before it goes to markets. There are any other number of scenarios where invisible issues arise — and sometimes go wrong — when things are not examined on the level of their biology.

Synthetic biology may also be able to provide far greater numbers of people with accessible pharmaceuticals, because it would lower the manufacturing costs of medications.

But synthetic biology is not regarded as a magic bullet. To go back to the example of cheap pharmaceuticals, many argue that synthetic biology will have detrimental effects on societies in the places like the global south. In those countries, many farmers’ livelihoods depend on growing the non-synthetic versions of artemisia — a pre-cursor to the malaria vaccine — or vanilla, and they will not be able to compete with corporately manufactured synthetic versions of their crops.

Why is an interdisciplinary approach important in synthetic biology?

BW: There is a very exciting and diverse set of interests that are focused on synthetic biology at the moment. Do-it-yourself biologists are interested in making the tools to access and use biotechnology more openly. Ethicists, anthropologists and other natural scientists are trying to understand the moral issues involved in doing this type of work, and the impacts it will have on human and non-human communities for years to come.

Essentially, there's a Pandora's box at play in terms of how this technology could be used. The more interested, critical and thoughtful minds we have working on it at once, the more productive a deliberation we can have. And hopefully that will give rise to the responsible insight we need in order to use synthetic biology as beneficially as possible with the least amount of harm.