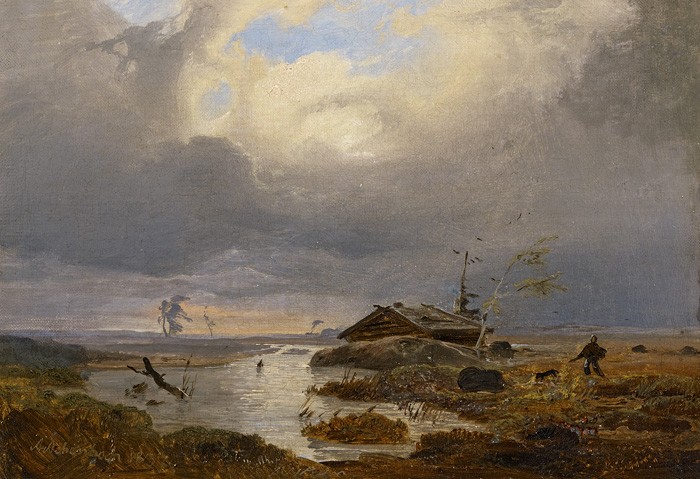 Andreas Achenbach's “Scandinavian Landscape” was sold by force in 1937 at Lempertz Auction House in Cologne. Its restitution to the Max Stern estate on October 29, 2013, was assisted by Van Ham Fine Art Auctions.

One of Germany’s leading auction houses has assisted with the return of a painting to the estate of Max Stern, the German-Canadian art dealer of Jewish heritage. The restitution follows repeated attempts at collaboration with various members of the German art trade over more than a decade.

At a news conference held on October 29 at the Embassy of Canada to Germany in Berlin, Concordia acted on behalf of the executors of the Stern estate and its three university beneficiaries — Concordia, McGill University and Hebrew University of Jerusalem — to announce the restitution of “Scandinavian Landscape,” 1837, by Andreas Achenbach. Achenbach, who lived from 1815 to 1910, was a founder of the German Realist school and is considered the father of 19th-century German landscape painting.

In the presence of Marie Gervais-Vidricaire, Canadian ambassador to the Federal Republic of Germany, and Uwe Hartmann, director of Germany’s Office for Provenance Research, estate representatives unveiled “Scandinavian Landscape.” The painting was one of hundreds sold by force in the infamous 1937 sale no. 392 at Lempertz Auction House in Cologne.

Some 75 years later, the Achenbach work was again destined for the auction block in Cologne — this time at Van Ham Fine Art Auctions — when researchers at the Koordinierungsstelle Magdeburg, a government-supported agency that runs the Lost Art Internet Database, identified it as an exact match for a Stern painting listed with Interpol. The Holocaust Claims Processing Office (HCPO) in the New York State Department of Financial Services, a partner in the Max Stern Art Restitution Project, contacted Van Ham and worked closely with the auction house to resolve the matter.

“We are grateful to Van Ham and the HCPO for facilitating the return of this painting,” says Alan Shepard, president of Concordia. “Our close ties with European and American restitution agencies, together with sustained diplomatic efforts, continue to demonstrate that international collaboration is vital to addressing looted art claims.”

As part of its ongoing commitment to Holocaust remembrance and restitution issues, Concordia — with major support from the Government of Canada — is hosting a conference entitled Plundered Cultures, Stolen Heritage on November 6 and 7, 2013. It will focus on the targeting of culture during mass atrocities.

Canada is currently chair of the International Holocaust Remembrance Alliance, an organization that positions the support of political and social leaders behind the need for Holocaust education, remembrance and research.

This year also marks the 100th anniversary of the founding of the Stern family art business. The Cornell Fine Arts Museum of Rollins College, Florida, is holding the exhibition Auktion 392: Reclaiming the Galerie Stern, Düsseldorf in its honour.