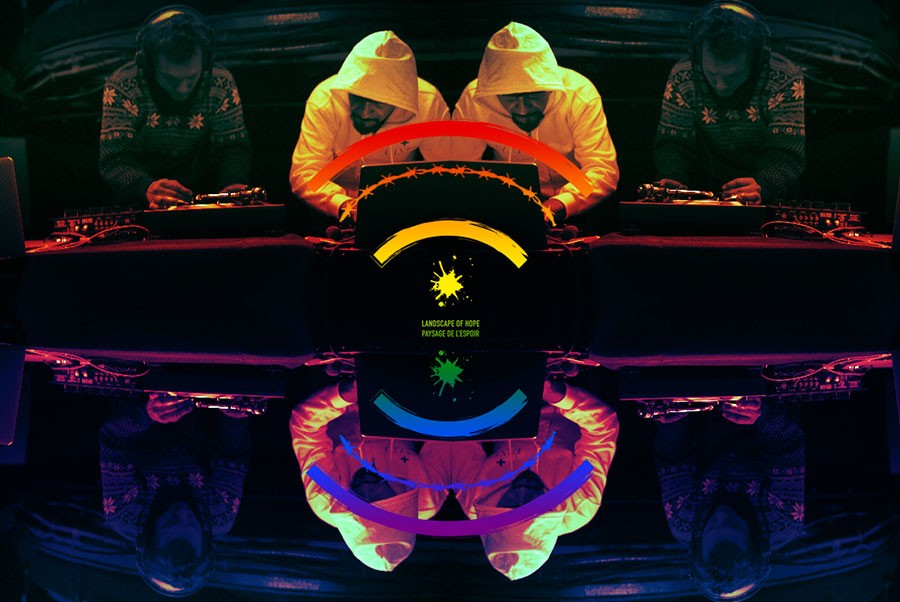 “It’s one thing to say you’re a public pedagogy specialist, but it’s another to actually relinquish your voice to the public,” says Vivek Venkatesh, multidisciplinary artist and Associate Professor in Concordia’s Department of Art Education.

In their newest work, Landscape of Hope, Venkatesh and his musical and research partner, Owen Chapman, Associate Professor in the Department of Communication Studies plan to do just that – they are hitting pause on their familiar roles as educators and researchers to assume those of multimedia performers and research-creators, eager to learn from the experiences of youth in the online world.

Art gives us a less opaque view on societal decay

Venkatesh’s art practices and research navigate a digital media landscape populated with hateful rhetoric. He holds a UNESCO chair on the Prevention of Radicalization and Violent Extremism, and runs the Centre for the Study of Learning and Performance which focuses on issues at the intersection of media literacy, technology, arts and culture. As an educator he has engaged in multiple pedagogical initiatives to improve public media literacy and to repair the collateral damage of intolerance in the rapidly evolving digital era.

Within a framework that interrogates consumer culture and the digital age, Venkatesh follows his passion for the dark arts by exploring themes of death, destruction, suicide and dystopia in his work.

“But it’s not all bleak,” adds Venkatesh, “I’m very enthused by how visual, musical and performing arts can give us a less opaque view on societal decay.”

“It was through audio sampling that we began to approach these topics collectively,” maintains Chapman. An internationally recognized expert in research-creation methods, audio art and electronic music, his knowledge of contemporary digital performance technologies and practices was key to the aesthetic that shaped the duo’s initial collaborations.

They first mapped out societal decay in Landscape of Hate, an electronic band and performance project co-created by Venkatesh and Chapman. In a series of improvised live performances, the group, which has now grown to include eight audio and visual artists, confronted audiences with intense soundscapes and abrasive visuals siphoned from news headlines to probe the notion of hate speech in the digital age.

“Hate isn’t something that only marginalized people experience, it’s something that happens to us all.” says Venkatesh. “I maintain that it’s one of the most beautiful and powerful emotions.”

Following the project’s touring success the duo began to reimagine the digital terrain of hateful rhetoric from a more positive perspective. How do youth cope with instances of discrimination and how could a new initiative magnify their voice and put them at the centre of the storytelling mechanism.

'We need the involvement of youth to shape the narrative'

These questions led to the development of Landscape of Hope.

In Landscape of Hope Venkatesh and Chapman seek to harness the power and ubiquity of hate and use it to drive constructive conversations about youth’s experiences with discrimination and bullying.

The two-part project begins with a workshop, presented in collaboration with Norwegian youth organization Tvibit, the Nordnorsk Kunstmuseum and the Tromsø Arctic Pride festival. Youth will be invited to contribute personal accounts of discrimination to serve as a catalyst for a conversation about hate speech and the media. During the workshop participants will be equipped with and encouraged to use digital media tools to creatively articulate their own narratives.

“That’s going to be be the most beautiful part of Landscape of Hope,” says Chapman, “Being able to work with youth and engage in some perspective-taking. We need the involvement of youth to shape the narrative.”

The content collected from the workshop will then be integrated into a live performance set to take place 48 hours later. Venkatesh and Chapman will set the audiovisual canvas and invite youth onstage to create the multimedia picture in real time.

“We want this to be a reflection of youth voices as they pertain to their own narratives of hate,” says Chapman. “We want to relinquish control over the types of sounds and visuals we would be playing with.”

“It’s such a great privilege and honour to perform with our new partners in Tromsø, and we want to represent the multitude of voices that exist in their diverse community,” says Venkatesh. “This project will allow us to find our space as artists, as educators, as researchers amongst the public.”

The goal of the project, according to Venkatesh and Chapman is to reach as many youth as possible and to create a sustainable framework for pluralistic dialogue long after the performance ends.

Venkatesh adds, “We don’t want to shock for shock’s sake, or create art for art's sake, it really is to make people feel empowered and to think of the art as a catalyst to these conversations, not an ending point.”