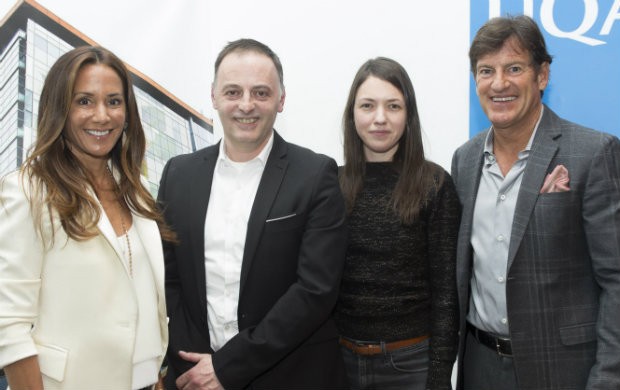 The Claudine and Stephen Bronfman Family Foundation presented the two 2015 Claudine and Stephen Bronfman Fellowships in Contemporary Art, worth $60,500 each at a ceremony on Monday, March 16, 2015. The winners are Myriam Jacob-Allard and Velibor Božović, recent Master's graduates from the Université du Québec à Montréal and Concordia University, respectively. The event was held at the Galerie de l'UQAM, in conjunction with the exhibition La nuit politique by artist Aude Moreau, a UQAM graduate and the recipient of a 2011 Bronfman Fellowship. The ceremony was preceded by a round table with several prominent members of the arts community discussing the importance of supporting emerging artists.

Originally from Sarajevo, Bosnia-Herzegovina, Velibor Božović was in his twenties when his hometown became a war zone and was under siege for more than a thousand days. In 1999, he moved to Montreal where he worked for eight years as an engineer in the aerospace industry before abandoning that career to devote himself to art.

"The jury found Božović’s work to be imbued with film culture. His work is rooted in  experiences from both his former home Yugoslavia, and his new home, Canada. He explores imagination, wandering and memory with great evocative strength," said Catherine Wild, Dean of the Faculty of Fine Arts at Concordia.

During his fellowship, Božović will develop a body of photographic and video works in the environs of the "phantom neighbourhood": a study the "phantom streets" of Montreal named for famous Canadian photographers. These streets appear on some maps of Montreal but that are now just a fallow field.

His work has been exhibited in Canada, the United States, Cuba, and Bosnia-Herzegovina.  His photographs have appeared in various international media, including The Paris Review, The New York Times, Descant, International Herald Tribune, Granta and Chicago Tribune.

Myriam Jacob-Allard
Abitibi-Témiscamingue native Myriam Jacob-Allard now lives and works in Montreal. She has a Master's in Visual and Media Arts from the Université du Québec à Montréal (2014) and a Bachelor in Fine Arts in Studio Arts from Concordia University (2009).

Her approach is interdisciplinary, primarily drawing on performance, video, bricolage and installation. Allard's project proposal was to revisit the culture of country and western music from an ethnographic vantage, using karaoke. She will conduct filmed interviews in order to create video portraits that include a repertoire of songs. Linking country and karaoke will allow her to move beyond the duality between local and universal, and between traditional and modern.

"The jury noted that the artist's formal choices are decisive and highly rigorous but constructed with irony. She evokes the local character of the culture without diminishing its content and presents an assumed innocence to the viewer," said Louise Poissant, Dean of the Faculty of Arts at UQAM. The jury believes that this Fellowship coincides with a key moment in the work of an artist who demonstrates great strength and maturity and that it will provide a platform for launching her career both locally and internationally.

Myriam Jacob-Allard's previous shows include the exhibition Un coin du ciel at the Galerie de L'UQAM (2014); the exhibition Maman(s) at Skol (2014), l'imagier (2015) and l'Écart (2015); the exhibition-event Country en trois temps (2009) in the basement of the St-Édouard Church; and various collective exhibitions and festivals in Canada, Europe and South America. Her work will be shown shortly at Galerie Sans Nom (2015) in Moncton.

Support for emerging artists
"Participating in the early stages of these young artists’ careers is a way to bolster the Montréal art scene, thus ensuring that our city retains its image as a major cultural centre. The nature of the arts — and the role of our educational institutions as a nexus for the creative community in Montreal — means that while our support might be targeted it cannot help but ripple out into the city at large," said Claudine and Stephen Bronfman.

First awarded in 2010, the Claudine and Stephen Bronfman Fellowships in Contemporary Art is awarded annually to two recent graduates from a master or PhD program in the visual or media arts, one from UQAM and the other from Concordia. These two-year post-graduate fellowships make it possible for recipients to develop their practice and their professional networks, enrich their teaching experience, further their research, and exhibit their work. The funds ensure invaluable access to a studio and materials.