Move your body, calm your mind

Tango is an invitation to enter into a relationship through the body - with a partner and with yourself. In tango, it is essential to listen, meet others through movement and be available for exchange. Mica and Manuco will offer us tango tools to be able to bond, dance and have fun. Join us with a partner or by yourself - no experience required! 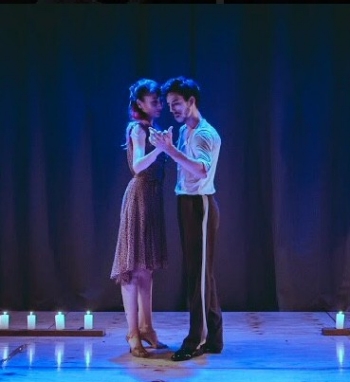 Micaela Spina graduated from the Instituto Superior de Arte del Teatro Colon as an Interpretive Dancer in Ballet, in Buenos Aires, Argentina. Manuco Firmani trained at the Instituto Universitario Nacional del Arte in composition in Dance Theater in the same city. Both were also trained in other dances, including tango. Micaela and Manuco have been dancing together since 2008, during which they have created their own style, merging and dialoguing with each other through tango.

As teachers, they have given classes and seminars in Buenos Aires and around the world, offering a contemporary view of tango while addressing its traditional technique and the connections that it generates.

As dancers, they have been part of different companies, touring internationally and performing in renowned theaters around the world. This includes performances of Rascasuelos, for which they are choreographers and dancers, in the main hall of Carnegie Hall, the Roskilde Festival in Denmark and in Buenos Aires.

Other credits include Micaela's lead role in the play Arrabal, directed by award-winning Sergio Trujillo and Gustavo Santaolalla, which premiered in Toronto and has toured from Bogota to Boston. Manuco co-choreographed Chantecler Tango which premiered in Buenos Aires and toured to the Chatelet Theater in Paris.

They have worked with great figures of Argentine dance such as Hernan Piquin, Cecilia Figaredo, Maximiliano Guerra, Iñaki Urlezaga, Mora Godoy, German Cornejo, among others. Currently, they are part of the independent company TempoTango, directed by Ignacio Gonzalez Cano.

Danc'Zen is a space to discover, practice or reconnect to dance as a way to find joy and enhance your wellbeing, by connecting to an art form that uses body movement as the main source of communication.