The New Politics of Immigration - conference by Catherine Dauvergne 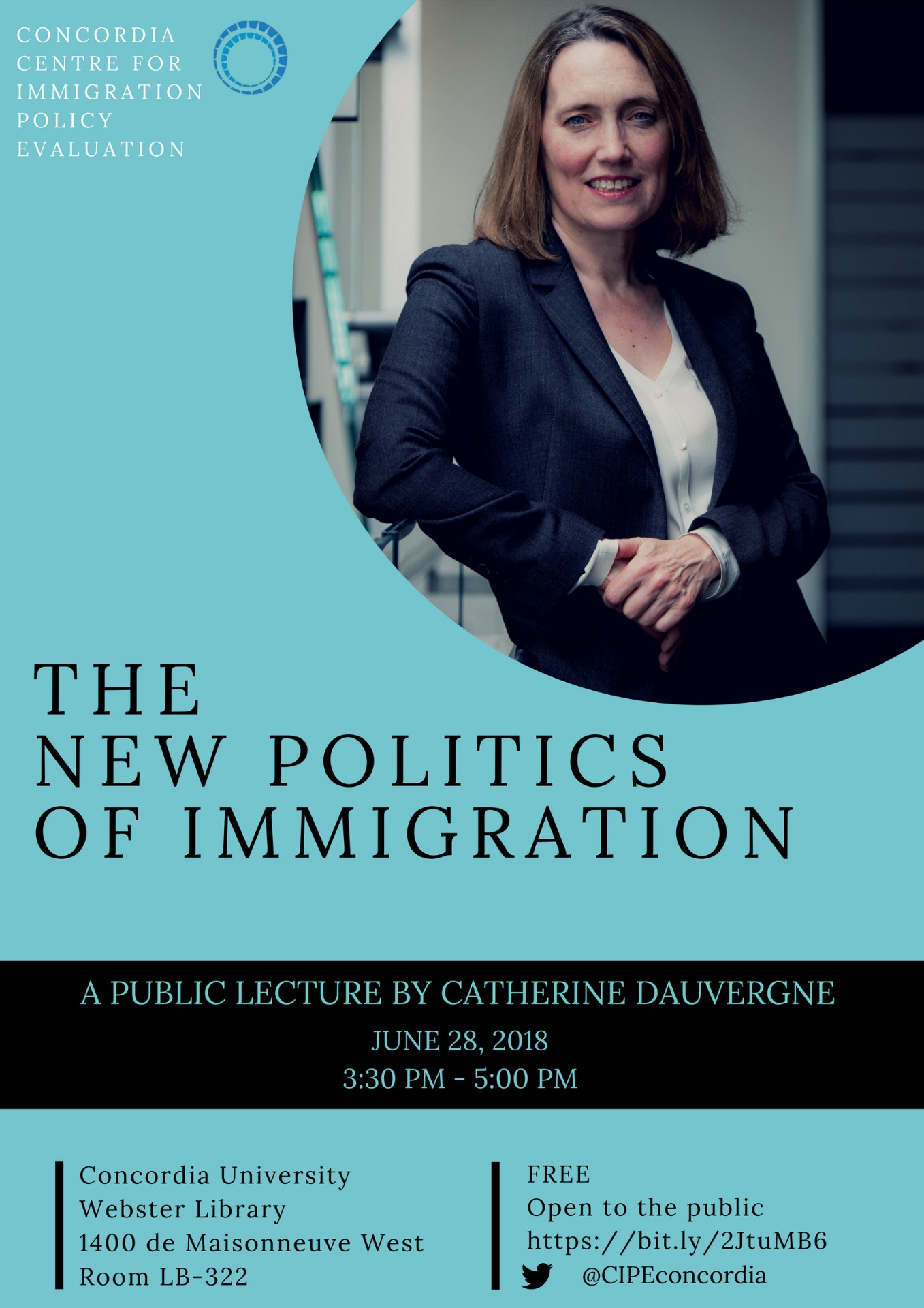 The Centre for Immigration Policy Evaluation at Concordia is proud to welcome Catherine Dauvergne, for a timely lecture on the new politics of of immigration. Please join us to discuss new trends in global immigration law and governance.

What’s New for The New Politics of Immigration?

This lecture considers events of the nearly three years since The New Politics of Immigration went to press. In immigration terms, a lot has happened since June of 2015: the flood of asylum claimants into Europe reached a high water mark, the United Kingdom voted to leave the European Union, Donald Trump was elected in the United States, and the Global Compacts made it off the drawing board. Closer to home, the Harper government was soundly defeated in an election where immigration politics played a central role.  Do these events challenge or confirm the central arguments of New Politics? In this lecture, Dauvergne considers how these most recent changes fit into the story of the book, concluding that while that while some challenges have arisen, on balance, the central narrative has been confirmed in ways that she could not have anticipated.  Now more than ever, it is clear that the idea of a settler society has lost its power as an explanation for immigration regulation patterns.

Catherine Dauvergne is the eighth dean of the Peter A. Allard School of Law. Professor Dauvergne has been working in the area of refugee, immigration, and citizenship law over the past quarter of a century.  For a decade she held the Canada Research in Migration Law.  In 2012, Dauvergne was named a Fellow of the Trudeau Foundation in recognition of her contributions to public discourse in Canada. She has written three books that take a broad perspective on the theoretical underpinnings of these areas of law, including considering how human rights principles and discourses fit into a migration and citizenship framework. Dauvergne is also an editor or co-author of four other volumes, including Canada’s immigration and refugee law casebook.  Much of Dauvergne’s work engages feminist critique of the law, and the place of women in immigration, refugee, and citizenship laws. Dauvergne is currently a research collaborator with colleagues Ben Goold and Efrat Arbel on the SSHRC funded project Finding a Place for Rights: An Independent Evaluation of the Impact of the Beyond the Border Initiative on Human Rights at the Canada-US Border.

This event is in English only. Please contact Mireille Paquet if you would like request some whisper translation. Mireille.paquet@concordia.ca

This event is help at the Webster library. For any physical accessibility concerns, please contact Mireille Paquet: Mireille.paquet@concordia.ca