Book Launch: The Forgotten Revolution: The 1919 Hungarian Republic of Councils

The Karl Polanyi Institute in association with Black Rose Books and The University of Chicago Press is pleased to invite you to the global on-line launch of The Forgotten Revolution: The 1919 Hungarian Republic of Councils, edited by András B. Göllner.

Speakers: The scholars who contributed chapters to the book, among others, András B. Göllner, Péter Csunderlik, Kari Polanyi Levitt, Raquel Varela. 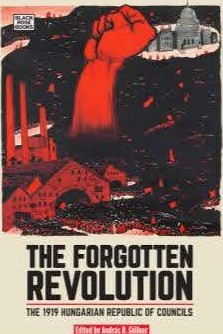 The Forgotten Revolution is dedicated to the memory and celebration of Ilona Duczynska, the wife of Karl Polanyi. It puts an end to a relentless, 100 year long character assassination of the 1919 Budapest Commune by those who cannot accept the idea that working men and women are entitled to govern themselves and to decide who gets what, when and how within their communities. It tells the story of the long-silenced millions who wanted to liberate not only themselves but to set an example for their oppressed brothers and sisters around the world. It vividly illustrates the true meaning of the word, Solidarity. We invite you to join this gathering of the international scholars from Europe and North America, including Duczynska’s daughter, Kari Polanyi Levitt, who contributed their ideas to this book which has already received widespread praise from around the world.

View full Calendar
Back to top