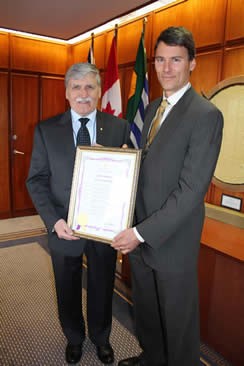 Civic dialogues are closed-door discussions with politicians from every level of government, business people, academics, NGO directors, journalists, religious leaders and public intellectuals. W2I engages them in locating the intersection between the national interest and preventing mass atrocities. Participants in the civic dialogues assess our strategic recommendations and brainstorm on how W2I's recommendations can be integrated into federal government policies. The aim of the civic dialogues, as opposed to public lectures, is to inform and galvinize a small group of interested, influential people in key North American cities who can help us to introduce resolutions at municipal councils, provincial and state legislatures, the Parliament of Canada and the Congress of the U.S. calling on the Canadian and American governments to implement W2I's recommendations. Having accomplished pilot civic dialogues in Calgary, Edmonton and Vancouver, MIGS is ready to expand its awareness raising activities across key North American cities.

Municipal proclamations in support of W2I 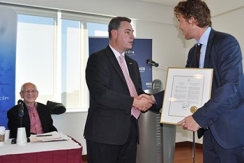 On May 10 2012, Mayor Rob Ford of the City of Toronto passed a symbolic proclamation in support of the W2I Project and the prevention of mass atrocities.

Mayor Naheed Nenshi of the City of Calgary passed a similar proclamation in support of the W2I Project on May 27, 2011.

On November 12, 2010, LGen Roméo Dallaire (rtd) met with Mayor Gregor Robertson of the City of Vancouver.

The Mayor proclaimed the 12th November "Will to Intervene Day" and he endorsed W2I's recommedations to the Government of Canada.

This was the first municipal proclaimation in favour of W2I and our thanks go out to Vancouver city councillor Geoff Meggs for his help in acheiving this.