Former US president Bill Clinton speaking on May 29, 2009 in Toronto, Canada 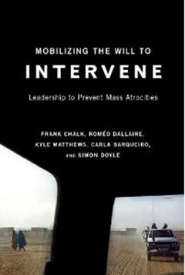 Following the wide success and dissemination of the W2I policy report, the Montreal Institute for Genocide and Human Rights Studies was approached by McGill-Queen’s University Press to publish the report as a book. In spring 2010, the W2I team edited and updated the document and transformed it from a policy report to a book adressed to scholars, students and the general public. The book titled Mobilizing the Will to Intervene: Leadership to Prevent Mass Atrocities will be published in September 2010. Subjects included in the book are military, security and conflict studies, political and international studies, and political history.

Despite the handwringing and promises of "never again," the grim recurrences of genocide and crimes against humanity around the world have made it emphatically clear that the international community has been largely ineffective in stopping mass atrocity crimes. Drawing on candid interviews with eighty key figures involved in American and Canadian responses to the Rwandan genocide of 1994 and the Kosovo crisis of 1999, Mobilizing the Will to Intervene explains why and provides a roadmap for change.

Since appeals to the "moral law" carry little weight in the political calculations of modern states, the authors argue that civil society must persuade governments that the prevention of mass atrocities around the world is in every country's national interest. In a globalized world, violence, disease, and instability triggered by mass atrocities in one place affect the security, health, and prosperity of all other regions. No nation is an island.

Impassioned, insightful, and determined, Mobilizing the Will to Intervene is a direct appeal to American and Canadian politicians, NGOs, journalists, and the public to participate effectively in the prevention of mass atrocities by pressuring their leaders to act. With simple, practical recommendations, this book shows how civil society can participate in preventing future mass atrocities and help repair a ruined system of international aid.

Order the book on Amazon.ca or through the McGill-Queen's University Press.

O’Reilly, Neil, “Mobilizing the Will to Intevene” , The Journal of Canadian Military History,Academic Council on the United Nations System (ACUNS) and the Laurier Centre for Military Stratefic and Disarmament Studies, March 2013

Thakur, Ramesh, "Intervention or protection: semantics in this case could make the world of difference",Literary Review of Canada, December 2010

Paul C. Heidebrecht, "Should MCC be mobilizing the Will to Intervene?", MCC Peace Office Newsletter, April-June 2010