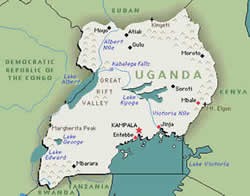 The state-run media is controlled by the New Vision Printing and Publishing Corporation, and the New Vision is the country’s leading daily. The corporation also has a few local publications. The pro-Museveni position is clear in many of the New Vision’s articles. Its biggest rival is the Daily Monitor, which often denounces human rights violations, corruption marring the government and attacks on democracy. Uganda was rated 96 out of 178 in the latest Reporters without Borders world ranking. Freedom of expression has been relatively respected and broadcasting was liberalized in the past decades but events such as the Buganda riots in 2009 or the elections in 2011 have led to a growing harassment of journalists. MIGS Media Monitoring reports on Uganda mainly use the Daily Monitor and New Vision and sometimes the radio as sources.