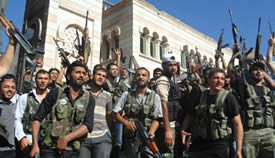 Members of the Free Syrian Army are seen in Azzaz, Aleppo province (Reuters). 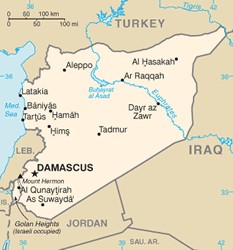 There is no media freedom and criticism of the Assad regime, the Ba’ath party or the military is strictly forbidden. The ruling Assad regime employs the  “Syria TV” public television station along with the private pro-government “Addounia TV” to disseminate its propaganda. No other television stations are permitted to air any political content. The Syrian Ministry of Information monitors and censors media it deems unfavorable to the regime and access to “offending” internet sites is routinely blocked. The opposition movement has benefited from open access to social media like Facebook, Twitter and Youtube to disseminate documented events from the scenes of the protests across Syria and images of the government’s violent crackdown on protesters have been beamed around the world. Foreign media is largely banned from operating in Syria and those who are permitted are escorted by government minders.