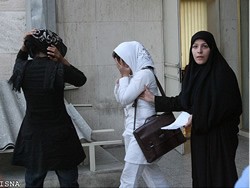 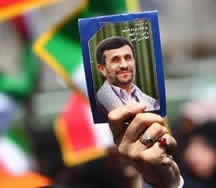 Supporters of President Ahmadinejad at a rally near the Imam Reza Shrine in the city of Mashhad. Credit : Meysam Alaghemandan, IRNA.

Media in Iran is highly regulated by a series of legal and institutional frameworks. Although freedom of expression is guaranteed by the Iranian Constitution, it is constrained by the fact that, as stipulated in the Article 24 of the Constitution, it shouldn’t be “detrimental to the fundamental principles of Islam or the rights of the public.” This regulation allows for the Iranian regime’s crackdown on the freedom of press and expression in the name of these principles through, among others, the banning of publications, the imprisonment of journalists and the policing of the Internet.

As for newspapers, there are over hundreds of them being published in Iran. Newspapers are, for the most part, funded by and affiliated with political parties or individual political figures, with the result that the written press is highly politicized.

Online news websites are an alternative outlet for Iranians to access information that is not available through the government regulated media. However, these are being increasingly censored by the Iran’s cyber police.