About the Media Monitoring Project 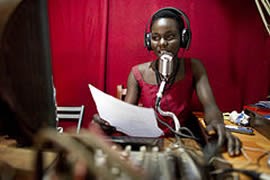 Our country-specific weekly reports aim to provide a snapshot of the information available to citizens on the ground. Our desk officers pay particular attention to several factors when summarising the contents of domestic news media, described and elaborated upon below, which may signal potential future instances of mass atrocity crimes in the country.

Radio and phone-in shows are ideal tools for diffusing hate propaganda, often winning a large listenership by engaging the audiences in inciting hatred of another group.

Read transcripts of RTLM’s broadcasts, as well as other Rwandan radio stations.

Social Media such as Twitter and Facebook are now also widely used to produce and disseminate dangerous speech.It is now important to monitor these new media as well.

We pay particular attention to:

Examples: Such examples are clear throughout our Media Monitoring reports, particularly in the Democratic Republic of Congo and Zimbabwe.

Hate propaganda demonizes a certain group as the “other”, claims that this group is planning to dominate society, or that it is plotting to physically annihilate pro-government or other groups. Hate propaganda instils fear among the population, exhorts the killing of members of the targeted group and depicts the situation as “kill or be killed” (a zero-sum game). It serves as a clear warning sign of the atrocities to come.

Governments can omit key details or obligations stemming from peace and conflict reduction agreements and can refuse to broadcast news programs aiming towards bridge-building between two groups.

Increasing Government Control over the Distribution of News

Through strict information management and monopolization of news sources, the government controls and narrows the availability of information to their population